It’s President’s Day and a significant portion of the people who live in the United States have the day off. Which is good. You know when I was a boy… Actually I hate saying things like “when I was a boy…” because it makes me sound old. Of course I am old, I just don’t like sounding like it. Anyway when I was a boy President’s Day was two separate holidays: Washington’s Birthday and Lincoln’s Birthday. And we had both days off. Somewhere along the line it was combined into one holiday and only one day off. Which is a gyp. But they did add MLK’s Birthday as a day off which kinda makes up for it. A little. Not really. So, what was I saying?

It’s President’s Day and a significant portion of individuals who reside in the central-ish area of the North American continent between Mexico and Canada have the day off. And you know what that means! We citizens of the United States celebrate the history of the highest office of the Executive branch by having reduced prices in retail establishments across our land. And men in powdered wigs and stove pipe hats will attempt to sell us used cars and half priced linens. Oh look, apparently I’m not only old, I’m a cynic as well. Hooray!

Okay, I’ll start…ah, screw it. This is going nowhere fast. How about you just enjoy some pictures of presidents being awesome? That’ll do. 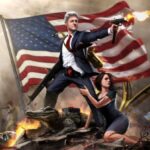