An Immaculate Fix: A Junky’s Christmas

It was Christmas Day and Danny the Car Wiper hit the street junksick and broke after seventy-two hours in the precinct cell. It was a clear bright day, but there was warmth in the sun. Danny shivered with an inner cold. He turned up the collar of his worn, greasy black overcoat.

This beat benny wouldn’t pawn for a deuce, he thought. He was in the West Nineties. A long block of brownstone rooming houses. Here and there a holy wreath in a clean black window. Danny’s senses registered everything sharp and clear, with the painful intensity of junk sickness. The light hurt his dilated eyes.

And so begins the story of Danny the Car Wiper, William Burroughs’ sad but strangely uplifting story about a junky looking to score some heroin on Christmas Day.

The short story follows Danny as he makes his way through the cold city streets contemplating his options for getting high. He attempts to steal a present from a parked car but is noticed and is forced to flee. Next, he finds an abandoned suitcase with some rather disturbing contents inside. He eventually sells the case for a few dollars and manages to finagle a tablet of morphine off an alcoholic doctor. Danny rents a cheap room and settles in melting the drug down and prepares a syringe. But just as he’s about to inject the drug Danny hears moans from the room opposite his. He investigates to find a young man doubled over in pain from kidney stones. In a reluctant act of generosity Danny gives the boy the shot to relieve his agony then returns to his room depressed and despondent. But then Danny is filled with the feeling of being euphoric, an “immaculate fix” he calls it, and drifts off to sleep contented. A Christmas miracle. 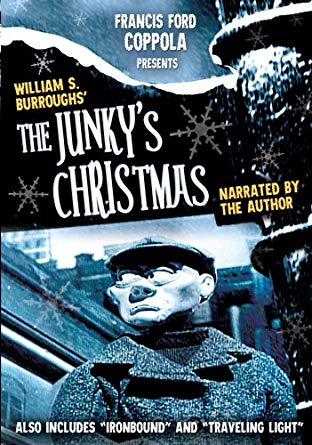 This story seems an unlikely candidate for an animated Christmas special but that is exactly what happened in 1993. Produced by Francis Ford Coppola and originally aired on VH-1 this 30-minute special features a Claymation adaptation of the short story.

Burroughs narrates the story (or rather reads it) and his monotone, deadpan delivery adds a sense of desperation and hopelessness while at the same time giving the animation a gravitas and authority.

Burroughs was himself a junky and there are details and slang used that give a feeling of authenticity. Little moments like when Danny pantomimes forgetting something, play-acting for an unseen audience in order to make it look natural when he turns round to attempt to steal from an open car. Or the meticulous way Danny prepares his syringe in the cheap hotel. Other details are vivid but rather bizarre and sometimes gruesome, like when he discovers severed legs in the suitcase he finds. (This is probably one of the few Christmas stories that involve a pair of severed legs – but I admit I haven’t researched this thoroughly.)

It is a bleak story, harsh in its depictions. Visually it is dark and the characters look beaten and worn. The soundtrack switches from traditional Christmas music and snippets from the Nutcracker to pounding drumbeats that punctuate Burroughs’ sandpaper voice. And the themes…well it’s about a junky looking to score so it’s not exactly a fun-filled romp.  Until the message becomes clear.

A Junky’s Christmas becomes in the end something – not uplifting exactly – but in a strange way triumphant. Amidst all the hopelessness there is in the end a moment of hope. 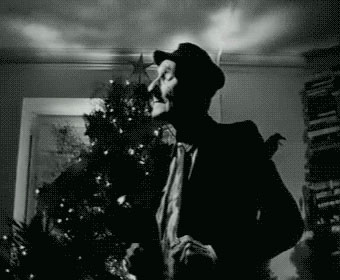 William Burroughs is not for everyone. His writing is terse and crude (intentionally so) and his frank depictions of sex, the underworld, and drugs are difficult and unflinching. But he doesn’t write these things to simply shock. There is a method here. Danny’s world is a harsh one, cold and barren and lonely. And Danny himself is self-centered and selfish, only looking out for his own interest. He lies and manipulates others to finally achieve what he wants. But in an act of generosity, he gives it away to someone who needs it more than he does. And in doing so is rewarded with something more than he could have imagined.

Danny walked across the room and pulled the shade down. He went back to his room and closed the door without locking it. He sat on the bed, looking at the empty dropper. It was getting dark outside. Danny’s body ached for junk, but it was a dull ache now, dull and hopeless.

Suddenly a warm flood pulsed through his veins and broke in his head like a thousand golden speedballs. For Christ’s sake, Danny thought. I must have scored for the immaculate fix! The vegetable serenity of junk settled in his tissues. His face went slack and peaceful, and his head fell forward.

Danny the Car Wiper was on the nod.