The Lord of Light: Jack Kirby’s Concept Art for Argo

Remember that time Jack Kirby’s art helped rescue six hostages in Iran? If you’ve seen the film Argo you should.  If you missed that part you can be forgiven, the details were a bit glossed over in the movie. If you weren’t specifically looking for it it could have gone right by you. I’ll give you a pass.

As a refresher the movie Argo dramatizes a combined CIA/Canadian operation to rescue six Americans left in Iran after the revolution in 1979. Those six had escaped the storming of the US embassy and were hiding in the home of the Canadian ambassador. A CIA operative named Tony Mendez created a cover story to get them out; he posed as a film producer directing a scifi film and smuggled the hostages out posing as members of the crew.

To add credibility to the cover story the CIA created an actual film production complete script and concept drawings. These came from a failed production of producer Barry Geller, who was hoping to adapt Roger Zelazny’s novel Lord of Light for the screen. Geller had contracted Jack Kirby to do the concepts for the film. The production fell apart for various reasons but the artwork was incredible. 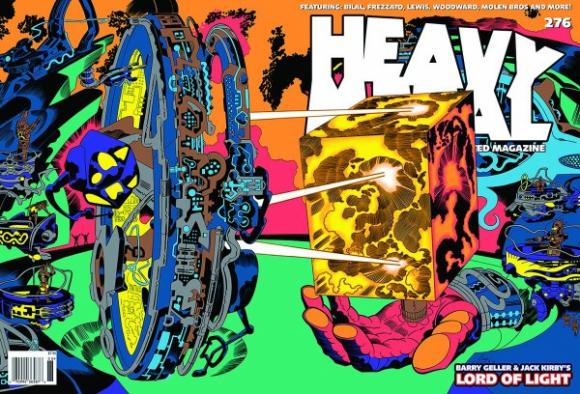 That art disappeared for quite a while but resurfaced when Argo raised interest again. The black and white inked pencils have been floating around the internet (see below) but the August edition of Heavy Metal magazine will be printing the colored versions.

This is important for two reasons: 1) We get to see some really impressive Kirby artwork in color for the first time and 2) we learn that Heavy Metal magazine is still a thing, who knew?

As a side note the Barry Geller production was to be followed up with a theme park based on Kirby’s designs located in Aurora, Colorado. As someone who lives in Colorado I am deeply distressed that there is not a Kirby designed amusement park in my state. Why did this not happen?

Speaking of ‘why is this not happening?’ we currently have fantastic Kirby designs for a Zelazny Lord of Light movie. Why has no one made this yet? Someone please, for the love of everything holy, make this happen.

Again for those who don’t know, Roger Zelazny is one of the greatest science fiction/fantasy writers of all time. Seriously, if you haven’t read and of his work go do so – now. In fact, start with Lord of Light. Its great.

Here is a gallery of the Kirby art for the film