If You Think Jon Snow Isn’t Coming Back, You Know Nothing: Self-Indulgent Nerdfest IV

Welcome back everyone to another “nerdfest” post. The second in less than a week! Yes, like a bear coming out of hibernation I have emerged from a cold winter slumber with a hunger to spread my options far and wide about ridiculously trivial subjects that I admittedly spend far too much time thinking about.

Now with Game of Thrones set to premiere in just a few weeks I felt the need to discuss the one simple, undeniable thing that will happen this season: the return of Jon Snow.

Before I begin I must caution anyone who has not been watching the show or has not read the books that I will be talking about things that may ruin a few key elements in the story for you or, to put it another way: this post is dark and full of spoilers. I had not read A Dance With Dragons when season 5 aired last year. So when Jon Snow was stabbed by the Night’s Watch and left bleeding on the ground my first reaction was, and I quote, fuck this show.

I seriously considered just walking out and never laying my eyes on it again. Get me invested in yet another character just to kill them for no good reason, I said, screw this. Of course that lasted all of a day before I began reading the book and coming up with theories for next year. And it became obvious that Jon Snow wasn’t really dead for a variety of reasons.

(As an aside I want to clarify I just want to focus on in-story reasons not set pictures or how long Kit Harrington’s hair is, while compelling in “real-life” there are plenty of reasons in the text to support Jon’s non-deadness.)

The thing is of course that Jon Snow isn’t just another character. He has been pivotal to the story from the very start and has been set up repeatedly as being something more than your average, everyday canon fodder. He is one of three characters that the story hinges upon. Daenerys, Tyrion and Jon. This is called A Song of Ice and Fire and each has a part to play. Daenerys: fire, Jon: ice, and Tyrion makes his way between the two uniting them.  This is very thematic and makes narrative sense. By killing Jon you break that cohesion and the story falls apart.

But Paul, you say, isn’t that that point? George RR Martin specifically meant for this to subvert the fantasy genre and so by killing a “pivotal” character he proves that this is not a fairy tale and you cannot count on traditional storytelling techniques.

[quote]”I’ve been worrying about Jon for years. He always comes back.” – Samwell Tarly [/quote]

Well, yes and no. Martin is very good at showing that there are no simple answers, everything has a cost. The characters in ASOIAF are not one dimensional, they are very complex. And the one thing he does very well is show that good guys don’t always win. In fact the horrible people are the ones who usually come out on top. He has created a detailed and vivid world where motivations are not black and white and outcomes are never certain. And in turn this world is more “realistic” than the typical fantasy story.

All that being said Martin is also a really good storyteller. In addition to being a great worldbuilder he knows how to weave story-lines together, drop hints and foreshadow events and basically tells a compelling tale. No matter how much he “subverts the genre” he will always come back to telling a good story.

Killing Jon Snow is not a good story. To build a character up for literally thousands of pages only to have that character die with no resolution is just bad storytelling. I don’t think George RR Martin would do that. He too good of a writer.

But Paul, you say again in my head, doesn’t Martin kill main characters all the time?

But does he really? Yes, characters die often in ASOIAF but are they main characters and for no reason? You could argue Ned Stark was pivotal but if you reread/rewatch Game of Thrones his death was foreshadowed from the very beginning and, though tragic, was essential to the plot. His death kicked off the War of the Five Kings and set in motion most of the plot-lines that the story hinges on. Robb and Catelyn? They were interesting but their presence was not necessary to the outcome of the story. Hell, Robb never even had a POV chapter. All the other major players are still alive and well. Okay, they are not all well, but they are alive.

Even so Jon is a special character and one that has been constantly built up as being important in the books and TV series. Why spend so much time at the Wall with one specific person only to have that come to nothing? It does not make sense. So here are the reasons why I’ve come to this conclusion.

We’ve Already Seen People Come Back From the Dead

The red priest Thoros of Myr was able to bring Beric Dondarrion back from the dead multiple times so we know it can be done. And Melisandre, at least on the show, has met with Thoros and could possibly have learned a thing or two from him. She is at the Wall (conveniently before Jon’s stabbing) and has said, in the books, that her power is getting stronger the farther north she goes. She also tells Jon about “daggers in the dark” and that he will have “grave need of her.” This all sounds like a pretty clear foreshadow of resurrection. Or at least a means to have it done.

This is not official and is just a fan theory but it does have a lot of evidence in the text to back it up and GRRM has not officially debunked it, so until we find out its not true I’m going on the assumption that it is.

The theory states that Jon Snow is not the bastard of Ned Stark and some unknown bar maid but is actually the child of Ned’s sister Lyanna Stark and Rhaegar Targaryen. When Ned finds Lyanna at the Tower of Joy she is covered in blood makes him promise something before she dies. It is theorized that the blood was from her giving birth to a boy and makes Ned promise to raise the child and keep it safe. As all Targaryens are being killed at this point he claims it as his bastard and calls him Jon.

If this is true this would make Jon a Stark and a Targaryen – Ice and Fire – neat right? This would also give him a claim to the Iron Throne.

Come At Me Bro

In the show Jon has clearly been set up as the opposition to the White Walkers. Remember that awesome standoff between Jon and the Night King in Hardhome? Surely you don’t have something like that and not pay it off right? Well, if you’re a terrible storyteller you do, but GRRM as I’ve said is not that.

Also, there is a prophecy of Azor Ahai , the hero of the Lord of Light, someone that will repel the White Walkers and bring light to darkness. That showdown sure looked like a hero facing off on the Big Bad. 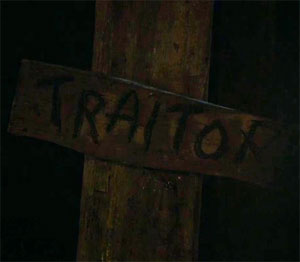 This is totally a cross.

So Jon is a humble servant that is coincidentally descended from kings and has attempted to help save the poor and downtrodden. He has talked many times of trying to bring peace and uniting those at war.  He is betrayed by those he trusted and is killed before a cross.

Or at least an analogue. GRRM is a really smart writer and he uses references to other works and ideas constantly, I find it hard to believe that the symbolism of a savior that is killed and resurrected then brings a light to the world is completely lost on him. I’m sure there will be some twist on this or different interpretation but seriously its right there, hard to miss.

Think for instance about how Jon is a member of the Night’s Watch and has taken a vow not to seek glory or title, this only ends with his death. If he has died that vow no longer is binding and he can seek the throne since he is actually a Stark/Targaryen. There are many little details like this that work far too well if Jon is alive. If he is dead these neat story lines fall apart.

Bottom line is that Jon Snow coming back would tie up many loose ends and fit neatly into the narrative thread. And it would make a better story.

That’s it really – Jon being alive is a better story. I think George RR Martin is too good an author to not tell a good story. And if this in not the case, if Jon Snow is really dead on TV and in print, then he knows nothing.