So this entry in the Kong project is the one I am (or was) least familiar with; that is I don’t remember seeing this as a child. But it feels familiar somehow, like I should have seen it. It has a “played in syndication for the majority of the 70s on a local UHF station” kind of feel to it. And that probably comes from the similar type of animation that was being picked up by those 70s local UHF stations at my peak “watch cartoons for hours on end even if I saw the same episode over and over again” period of my life. But more on that in a bit.

The King Kong Show is a Japanese anime style program that was produced by Rankin & Bass. You know the team that brought you Rudolph the Red Nosed Reindeer and The Hobbit TV special and a large number of other beloved but deeply, deeply weird animation and stop-motion programming that entertained and more than likely scarred you at an early age. It ran for three seasons on ABC for a total of 25 episodes between the years 1966 to 1969. It was also the first anime series produced in Japan for an American audience. So that’s neat.

The show itself focuses on the Bond family – in particular the youngest son Bobby who is befriended by Kong – and their adventures defeating the evil mastermind Dr. Who. (So I get to write a very fan-fic title “Dr. Who meets Bond” but the actual story is not nearly as exciting as it may imply. Still taken out of context the idea of a three-way team-up/battle between King Kong, Dr. Who and Bond is ripe with imaginative possibilities…sadly just not in this show.)

As for plot it is pretty much the same routine every episode. Dr. Who (or another similar antagonist) plans a plan of world domination that usually involves the capture or control of Kong that is eventually thwarted by the power of friendship. The episode will then end with a humorous vignette that, although meant to be funny or sweet, actually makes you feel vaguely uncomfortable in a way that you really can’t put a finger on to determine exactly why.

Now I have to say that I did not watch the entire series. I only watched a handful of stories – 8 to be exact – that included the pilot and assorted others scattered throughout the run. It should be noted that every episode originally ran 30 minutes (give or take) and included two short stories separated by a comedy cartoon Tom of T.H.U.M.B. that was a spy spoof starring a tiny, bumbling agent. I did not watch any Tom of T.H.U.M.B. Look, I’m dedicated to this project…just not that much.

But I have to say 8 episodes are plenty to get the feel of the show. It is charming in its own little retro-nostalgic way, but it ends up being very repetitive and the stories are so similar that it is really hard to muster any real enthusiasm for a complete series viewing. Unless you are really into early 60s obscure Japanese-American children’s cartoons, or if you were around at this time and have an overwhelming fondness for it The King Kong Show is really just a historic novelty. It’s not bad; it’s just is sort of mediocre. That at least is my take as a grown-up in the 21st century. Things might have been very different if I had seen this as a kid. 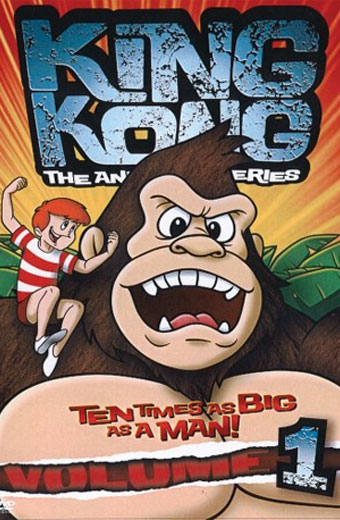 Rankin/Bass Productions
“One day a boy too young to know the danger, made a friend of this giant fearsome stranger.” – from the theme song

As I said I do not remember ever seeing this as a kid. To my knowledge it was not re-played in syndication in my area or if it was I didn’t know about it. But still there is something familiar about it as I said.

The series has a style reminiscent of 60s cartoons imported from Japan that were played in constant rotation on local TV stations like Speed Racer or Marine Boy; although with a much reduced production level closer to say Rock & Bullwinkle than early anime.

And the story premise itself is similar to many Japanese fantasy/sci-fi imports at the time, both live action and animated. And that is basically a young kid that somehow acquires the friendship and services of a giant animal or machine and is doggedly pursued by a nefarious organization or evil overlord.  Think Johnny Sokko and his Flying Robot or Space Giants, Gigantor or any of the early Gamera films. In this sense the series feels like something I’ve seen many, many times. In fact I had to stop at several points and rack my brain to remember if maybe I had seen this before…but no it just incorporates many of the tropes and clichés of the time giving it that feeling of familiarity.

So in that way The King Kong Show could be seen as an early precursor to much of the media I loved as a kid, possibly influencing those shows and movies in ways that are both subtle and overt. Perhaps I owe a great debt to The King Kong Show for in a roundabout way enriching my childhood in a variety of ways that I was unaware. Or perhaps I’m overthinking this and giving it far too much credit. Perhaps it’s just a silly cartoon that came and went and had no influence whatsoever and is, as I said above, simply a historical anomaly.

Certainly it would not span a live action feature length sequel. That would be absurd right?

But of course it did.

Back next time with King Kong Escapes.