Author’s note: This was written nearly seven years ago and I must admit my opinion of the Star Wars Holiday Special has softened a bit. Oh, I still think it’s awful don’t get me wrong, but it has for me fallen into the “so bad it’s good” category. Well, sort of. You see while I do still find the choices made in this bizarre and strange little program to be mind-boggling and at times incomprehensible I have come to see that there is a charm to it. They are just so dammed earnest about the whole thing. Opinions change with time and thought and having to do it over again I would have been a bit less harsh in my assessment. But as it is, it is what it is, so here it is. (How do you like that for a sentence?) Anyway, here is my snarky look at the Star Wars Holiday Special from a younger me. 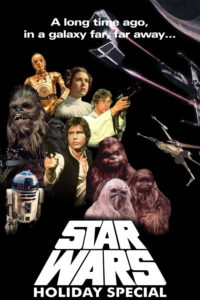 Yes, the Star Wars Holiday Special, the much-maligned cheese-fest that brings groans of displeasure to geeks everywhere. The one thing that makes the prequels look like Citizen Cane. And, to be fair, the one thing in the Star Wars universe that George Lucas didn’t intentionally screw up. He was off making Empire at the time and has said that he would personally smash every copy of this abomination with a sledgehammer if given a chance. (I personally don’t think he would do that. I think he would simply add some digital effects and possibly some quasi-racist humor and a CGI Hayden Christensen in place of James Earl Jones. I could be wrong. I’m not.)

Despite what I said to start this post the Star Wars Holiday Special actually has nothing to do with Christmas. It was aired one time in November 1978 making it more of a Thanksgiving thing really. I remember it being on, I remember watching it. I remember laughing about it at school on the playground. But if it were not for YouTube I wouldn’t remember a thing about it.

Now, is it really as bad as everyone says it is? Well, yes. Probably worse. Again to be fair, had it just stuck to the main story it is possible that it would be better regarded. Not liked mind you, maybe just seen as a quaint bit of nostalgic fluff; an anomaly in the Star Wars mythos. But there is padding. And my God, what padding it is.

But let’s start with the main story. We open with Chewbacca and Han Solo piloting the Millennium Falcon through some stock footage of Star Destroyers on the way back to Kashyyyk (the Wookiee homeworld) for Chewie to celebrate Life Day, a very important holiday for Wookiees (I guess). They get held up by lasers and stuff.

On Kashyyyk we meet Chewie’s family; his wife, Malla, his son, Lumpy, and his father Itchy (yes, Lumpy and Itchy, not working too hard on the name thing). They are understandably upset that Chewie has not arrived and have to FaceTime Luke Skywalker to be put at ease.

Back on the stock footage, Darth Vader tells his troops to search house to house for rebels which they do include Chewbacca’s house where they tear up Lumpy’s favorite Bantha stuffed toy. Very sad.

Eventually, Han and Chewie arrive and save them from the Imperial troops. Life Day is celebrated with Wookiees wearing red Snuggies and Princess Leia sings a nice song about family and love.

Again, if the special had just been that this may have a fondly remembered bit of fun. It had Star Wars-y elements and had action and was kinda cute. But for some unknown reason, the producers decided there needed to be variety show elements added. And they spared no expense to jazz it up. And by “spared no expense” I mean they threw in a bunch of cheap, ridiculous filler.

For instance, there is the strange, creepy holographic circus act played on a checkerboard.

There is the Imperial trooper watching a music video of Jefferson Starship for five minutes. Five minutes!

And Harvey Korman dresses in drag as an alien and gives a cooking lesson – a whole fake recipe from beginning to end for no reason! And Art Carney is in it, which is weird.

And there is the very bizarre scene where Itchy, the old man Wookiee, wears a virtual reality helmet and watches Diahann Carroll moan and groan and sing a sultry song and moan some more. This is…uncomfortable. Really it is. Just watch this if you don’t believe me (or maybe don’t, you might be better off):

And then there’s Maude. Yes, Bea Arthur sings a ballad in the Mos Eisley cantina. Honestly, this isn’t as bad as it sounds. It is actually kind of fun. At least she’s trying.

And then there’s Maude. Yes, Bea Arthur sings a ballad in the Mos Eisley cantina. Honestly this isn’t as bad as it sounds. It is actually kind of fun. At least she’s trying.

In the end, this is just horrible. A strange travesty of show business that is cringe-worthy to watch.

But, and I know I’ve been hard on this special so this may sound weird, there is something about it that makes me come back every year to give it another look. Is it the “so bad it’s good” syndrome? Am I a masochist? I don’t know. Probably.

It is ridiculous. It is goofy. It is poorly written and poorly made. But there is a strange charm to it, like a high school play or a child’s dance recital. Yes, it’s bad but gosh they’re trying so hard you just gotta admire them. And they’re trying to do Star Wars. That’s so cute.

So merry Christmas, a happy belated Thanksgiving, and a jolly Life Day to everyone! Snuggle up with your favorite Nerf Herder and may the Force be with you as you enjoy the strangest, most bizarre excuse for a holiday special ever made.

I suggest drinking before and during. Trust me it makes it way better.

Paul is a writer, artist, and designer. He spends an inordinate amount of time on the Internet blogging about silly things and even more time making things up and then attempting to convince people they are proper stories. He also talks into microphones from time to time.