Welcome back to the Delta Quadrant and thankfully this week we do not have a time/space anomaly. But we do get time fissures – which is different? Also for the second week in a row the plot revolves around a paradox.

Basically Voyager comes to investigate a planet that has been destroyed by a cataclysmic event but it turns out the the reason the event happened was because the Voyager came to investigate. And Janeway gets a nice hero moment by destroying her own rescue in order to save the planet and resetting the story to zero.

(This idea of “everything back to the way it was” in Voyager will become something of a trend but there will be plenty of time to discuss that in the future.)

All in all this is a very by-the-numbers Star Trek story, something that would not be uncommon in TOS or TNG. This is not meant as a negative criticism. On the contrary this was a very enjoyable episode and I found myself enjoying it very much. Star Trek, I feel, works best when it tells a straight forward morality play with a twist. The twist in this story being the fact that the very presence of the crew causes the destruction even as they were attempting to prevent it.

“You’ve been reading too many of those Darkstorm tales young fellow. Have a convection bar and calm down.” – Policeman

Two characters that don’t get along must learn to survive when put alone in a dangerous situation. Yawn.

Even by overused Star Trek plot-line standards this one is tired.

The “twist” of course is that Paris and Neelix must care for a newly hatched baby and so bond over being surrogate parents in a cheap,  cut-rate Enemy Mine ripoff.

There are some very high handed speeches about the Prime Directive and how it is an “enlightened philosophy” and how it is sacrosanct and unalterable. But Janeway dismisses it pretty quickly when she thinks, even for a moment, that it has been compromised. When questioned she simply says, “I don’t think it applies any more” and hand-waves it away. Yes, it can be argued that once they became involved it didn’t matter anymore but there was only the slightest pretense in the first place.

And this is obscuring the elephant in the room to begin with. Janeway was willing to let an entire species be extinguished to adhere to the Prime Directive. Had it not become apparent that they were the cause of the catastrophe she was perfectly happy to just let them all die. Again hand-waving it away as “not involving ourselves in the development of pre-warp cultures.” But they did not have to acknowledge they were an advanced society to just warn them of danger. And isn’t that what the Prime Directive was created for? To protect cultures and species to develop on their own? How does letting an entire planet be destroyed a moral decision? The Prime Directive has some issues is all I’m saying.

None of this means anything anyway because whatever discussion or issues raised in this episode are wiped away with the resolution. No one remembers anything (except Kes) and so whatever moral or ethical dilemmas anyone faced are simply nonexistent. The reset button at the end of every episode has some issues is all I’m saying. 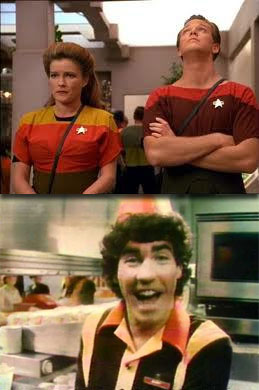 Have it your way!

All that aside there was a great moment when Janeway is being interrogated about her cover-story of being from Kalto province and is told, “I’ve never seen someone form Kalto province with that color hair,” she simply responds calmly, “well, now you have.” Okay, that was badass.

And the subtle world-building of the Planet was handled quite well. The mention of Kalto province and continental transport. The technology seemed advanced but not futuristic. And we get the notion that there are different fashions on different areas of the planet. Albeit where Janeway and Paris are they all dress like they worked at Burger King in the 1970s. Still, quite well done with limited time and dialogue.

Meanwhile Paris’ attempted corruption of Harry to date the Delaney twins was decidedly not badass. Oh I’m sure the writers and the director though it was just a hilarious comedy moment, but yeah, it wasn’t. Really awkward and did nothing to move the characters forward. But the good thing is we got a reprise of it at the end. Almost word for word. *sigh*

But as for moving characters forward we got a nice bit of Kes and her psychic ability growing. She was decidedly in the background in this episode but still was given a way to grow ever so slightly. It would be nice if every non-episode-centric character got a nice bit like this. Alas no, everyone else just goes through the motions, and Neelix actually goes backwards acting like a patronizing dick.

But even with my nitpicks it was a good episode. Not great, but good. I like the fact that they are trying to tell a good story even if they occasionally fall into some cliches or open doors without ever walking through them. So far it is entertaining.

Next Time On Star Trek Voyager