A Very Pagan Christmas: The Life & Adventures of Santa Claus

I’m sure you all know the story of Santa Claus, right? Of course you do. Everyone remembers how when Santa was an infant he was abandoned in the woods in a snow bank till the personification of the forest – the Great Ak – found him and gave him to a lioness to be cared for and was later stolen by a wood nymph who pleaded to be able to keep the baby because she was desperate to have a child. I’m sure this is all sounding completely familiar.

So it would be useless for me to tell you how the wood nymph Necile was given permission to raise the baby in harmony with the forest and how the lioness Shiegra stayed on as the child’s protector along with a multilingual imp named Tingler.  And how when he reached a certain age Claus – that is what the wood nymph Necile named him – was taken by the Great Ak to see the sadness and struggles (and surprising amount of child abuse) in the mortal world, and after seeing this Claus decided to make children happy by giving them toys. So he moves to the laughing valley of Hohaho to build a workshop. Of course you know this, it’s the tale we tell around the Christmas tree every year.

And in that story that we all know by heart we remember how the Awgwas – the evil creatures who influence bad deeds – hated Claus’ attempts to make children happy and so stole all of his toys forcing a war between all the immortals led by the Great Ak who wields a magical ax that causes the Awgwas to perish (his words not mine). Having won the war Claus continues his good work.

But as we all know there were too many toys to carry so Peter Knook – the protector of all knooks (obviously) – allows Claus to use his magical reindeer but only for one night a year. Claus chooses Christmas Eve.

At the end of his life Claus is called a saint (or Santa) and he tells everyone to decorate a tree to remember him. By just as the spirt of Death is about to visit him the Immortals bestow on Claus the mantle of immortality so he may continue his yearly ride to deliver toys to all the world’s children.

Yep, that’s the story we all know. 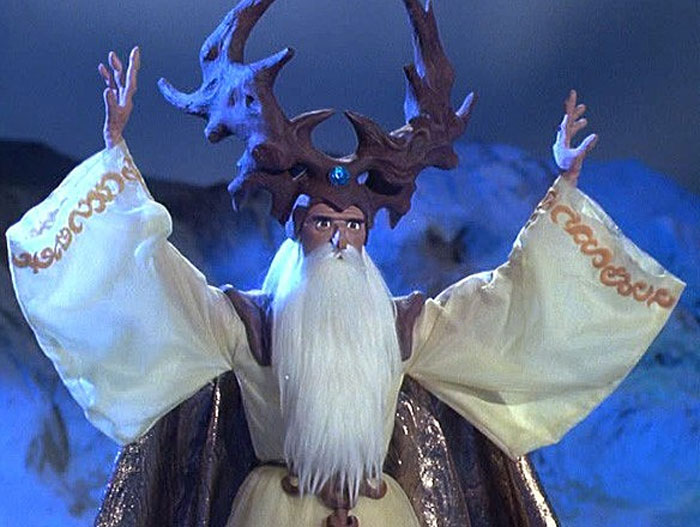 The Great Ak: If Gandalf were an elk.

If perhaps this does not sound familiar to you then you haven’t seen the 1985 Rankin/Bass special The Life & Adventures of Santa Claus. This was the last of Jules Bass and Arthur Rankin Jr.’s many, many holiday specials that began with Rudolph the Red Nosed Reindeer in 1964. The majority of these special were done in a very distinctive stop-motion animation style called “animagic” that utilized Japanese animators and anime techniques, albeit with a very American style and themes.

And as a Christmas/Holiday special it is one of the more bizarre offerings you will ever find. It pretty just goes full pagan. The story was an adaptation of the book by L. Frank Baum (yes, the Wizard of Oz guy) which was published in 1902 when Christmas traditions were still in their infancy so pagan themes in the vein of fairy tales would not be out of place of uncommon. In 1985 however it was.

Personally I had no idea this thing existed till I stumbled on this special in the late 90s. I was flipping through channels until I landed on a family station running a Christmas marathon and this happened to be on. I remember my reaction to be something along the lines of, “Golly, I am flabbergasted by the nature of this program!” Well to be honest is was more along the lines of, “What the hell is this shit?” And I proceeded to watch in awe and wonder.

Since then The Life & Adventures of Santa Claus has become one of my favorite Christmas shows, one I watch at least once every year. The sheer strangeness of it still astounds me. How many holiday specials have personifications of nature in them? And Santa is best friends with a lion. Those things right there are enough as far as I’m concerned. But there is more than just that.

Technically it looks great. The stop-motion animation style of Rankin/Bass had been refined over two decades so it is smoother and more fluid, while at the same time keeping their distinct look. And there is something so appealing to a solid object on screen. The puppets and backgrounds have weight and depth and a feeling of being in the “real world.” The movement isn’t perfect or natural, at least in a realistic sense, but there is uniqueness and a visceral satisfaction you get much the same way watching a Ray Harryhausen animation does. 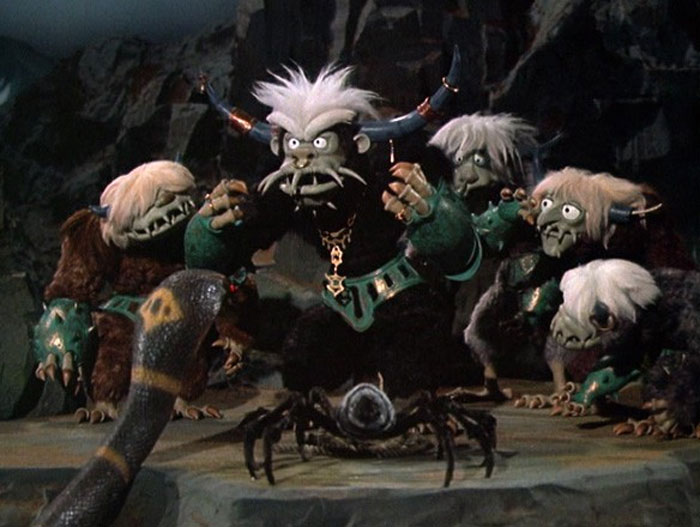 I’m guessing its hard to eat with that mouth. No wonder he’s cranky.

And finally it’s just a good fantasy story. A special child raised by fairies and gods who is shown the cruelty of the world that chooses to work toward making it better. He overcomes demons and monsters with magic and a good heart till finally he is given a grand gift, a boon to continue working with generosity and love.

Yes it is weird. And strange. And deeply bizarre. But it is also different and sweet and it tells an unusual tale. Anything that does that I’m on-board for.