War of the Worlds: 99 Science Fiction Films You Must See

The 1953 film War of the Worlds, produced by George Pal and directed by Byron Haskin, is probably the most recognized adaptation of H.G. Wells’ 1898 novel and is considered to be a classic in the genre. I consider it the best 1950s B-movie ever made.

There have been many adaptations of War of the Worlds over the years. Including of course the infamous Orson Wells radio drama that scared the crap out of listeners in 1938; and a 2005 film with Tom Cruise that scared people but not for the reasons Stephen Spielberg intended. In addition there have been comics and a TV series and even a concept album. But I’ll wager the 1953 film is what most people conjure up when they think about the War of the Worlds.

Now I guess I should first explain what I mean when I call this the best “1950s B-movie” ever made. Technically this is not a B-Movie. By strict definition a B-movie is a low budget film that was intended to be the bottom half of a double feature, sort of like the B side of an album. And War of the Worlds was neither of those things; in fact it had a relatively large budget for the time with recognizable actors, a well-regarded director and studio backing. But there is a certain aesthetic that B-movies had in the 1950s that War of the Worlds fits quite well.

A typical B film of the era would include (in addition to a low budget) stock characters with a formulaic plot in a genre setting; horror or science fiction being the most prevalent. And because of this combined with the fact that these films could be made quickly and cheaply they were often dismissed by critics and censors which allowed for some experimentation in story and message. This usually took the form of contemporary anxieties like atomic power, crime, and the cold war.

In addition to this B films of the era, especially sci-fi films, had a particular feeling to them that is hard to quantify. It is a kind of earnestness. There is a feeling of hope and awe toward the future and the great progress expected to come mixed with a deep seeded fear of the present. If the problems of the present could be overcome the promise of the future was unbounded. But solving current problems was not a given, and there were those who actively sought to hinder that process. Thus one needed to be upright and vigilant to see to it that the great future was born. And there were many ways in which this earnest attitude was portrayed – from simplistic, to complex, to experimental – but always with a sense of wide-eyed innocence that made these films rather charming.

War of the Worlds, while based on a famous novel from 1897, had a very distinctive 1950s feel. The plot was updated to contemporary times and reflected not a critique of colonialism as the novel had done but instead used the idea of alien invasion as a stand-in for communist infiltration.

Yes, War of the Worlds, is a Red Scare themed movie. 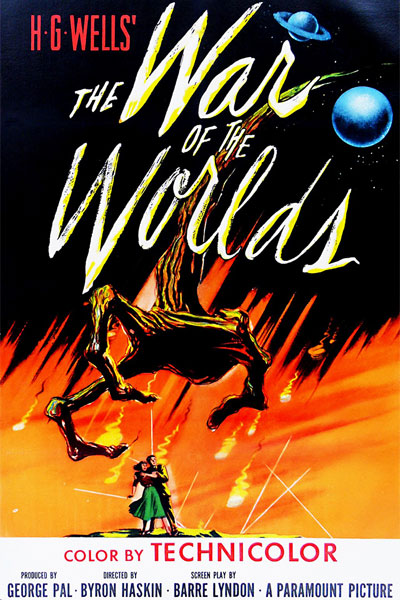 Byron Haskin
“All radio is dead, which means that these tape recordings I’m making are for the sake of future history – If any.” – Reporter

In a small town in California what is believed to be a meteor crashes and takes out the power with an electromagnetic pulse. The meteor turns out to be an alien ship witch rises up and begins to wreak havoc across the countryside.

Luckily Dr. Clayton Forrester, a scientist, happens to be fishing in the area and is on hand to describe what is going on and deduces that this is a Martian craft and there is a good chance the Earth is in big trouble.

And he’s correct, in fact other meteor/space ships have crashed all over the planet and are rising up in a full scale invasion. The earth’s military valiantly attempts to defend the planet, even going so far as to use the a-bomb, but the Martian technology is just too much for mere humans.

Inhabitants of cities and towns flee to the mountains or any safe place they can find trying desperately to escape the alien invaders and all seems lost. That is until the people of Earth pray for a miracle and one comes in the form of common bacteria that is harmful to the Martians who all die en mass and the Earth is saved…by prayer.

As the narrator puts it:

“…no resistance to the bacteria in our atmosphere to which we have long since become immune. Once they had breathed our air, germs which no longer affect us began to kill them. The end came swiftly. All over the world, their machines began to stop and fall. After all that men could do had failed, the Martians were destroyed and humanity was saved by the littlest things, which God, in His wisdom, had put upon this Earth…”

Why You Should See It

Well it is, as many of these films on my list are, a classic. And if you are like me – a sci-fi completest – you will want to see anything that is considered historically important in the genre. But that aside it is a well made and very entertaining movie. First of all the look of the film is brilliant. The effects – obviously dated now – were groundbreaking at the time and rightfully won an Oscar for best visual effects. But they still have a interesting feel to them. The alien creature and ship design are one of the most unique in sci-fi history and are still haunting and creepy. And the sound design has an unnerving eeriness that sticks in your brain and will unsettle you like nails on a chalkboard (in a good way). And there is something about Technicolor that just makes a film seems unworldly. It adds a surreal haze that enhances the overall fantasy feeling of the movie.

And it is a good action movie. It is fast paced with short breathers for character interactions and if you take this as a straight forward alien invasion movie it delivers on all the beats you’d expect. There are large fights with tanks and space ships shooting energy beams and tense moments of horror with even a jump scare or two. So as just an alien horror film it works better than some modern movies I could mention.

What About the Themes?

Sci-fi movies as an allegory about the communist menace overrunning the good ol’ US of A was a common enough one for the time; with films like Invasion of the Body Snatchers and Red Planet Mars to name only a couple. So War of the Worlds was in familiar territory with its themes. The thing that sets it apart from other films of the time was its execution.

As I said it is a well paced action film to begin with so any allegorical message doesn’t feel overpowering. The signs are there if you want to see them but if you choose to overlook them that works too. The most obvious change to the source material is the way religion is depicted. In keeping with the anti-communist theme the importance of religion is upgraded. In the original novel Wells’ attitude toward religion and faith is decidedly humanist. In much of the book religion is treated with a secular viewpoint and characters such as the curate are portrayed as cowardly and with disdain. In the film however the role of faith is seen as a strength with the ultimate “victory” over the Martians portrayed as God’s Will, the culmination of prayer rather than simply poor planning on the Martians part.

But all of this is very much in keeping with that 1950s B-movie aesthetic I mentioned. The Cold War was in high gear at this time with McCarthyism and all its evils very much in the public consciousness.  The idea of using an actual alien invasion as a stand-in for the invasion of ideas many feared was a pretty straightforward metaphor. And add to that the notion of the enemy having weapons that could totally annihilate you and you family and you have Cold War paranoia in a nutshell. Seriously, this stuff writes itself.

None of this takes away from the overall experience of the movie, if anything it adds to the experience. Not that Cold War paranoia is a good thing mind you, but it does serve as a time capsule for a mindset at a particular time in history.

I fist saw this movie on television with my grandfather. I distinctly remember how excited he was to see this again, it was obviously one of his favorites. And as we watched he told me stories about seeing it in the theater, about how the crowd reacted and about how awestruck he was by seeing the ships on the big screen. And during the scene in the farmhouse when we see the aliens for the first time I remember how tense he was leading up to that first reveal, he jumped when it happened. “Always scares the bejesus out of me,” he told me with a wink.

So this movie has a certain personal nostalgia for me beyond just seeing something cool as a kid. I was able to share something with my grandfather, something that makes this movie a bit more special than simply the love of an old film. It was a moment that I remember in all its detail – the smell of his cigar smoke, the taste of the grape soda I was drinking, the way the television would flicker occasionally if you stomped the floor too hard, the feel of the shag rug as I lay on it, the way my grandfather would complain every time there was a commercial – this all adds to the overall appreciation of this movie that goes way beyond the movie itself.

And I suppose that is the way with many things we experience as a child or even as an adult. It is not simply the thing we see but it is also the place we see it and the people we see it with…all this is part of the memory, part of the whole.

Even if War of the Worlds was not a particularly good film I suspect I would enjoy it nonetheless for the way I first saw it. But it actually is a good film, that just makes the experience all the better.