Ohh…Yeah: Guardians of the Galaxy Delivers

The one thing you should take away after reading this is Guardians of the Galaxy is simply a hell of a lot of fun. No dystopian futures, no post-apocalyptic wastelands; just pure, unadulterated space fun. Shiny ships and space pirates and secret objects with hidden meanings, strange creatures and funny jokes. For those reasons if nothing else, go see the movie.

I suppose that is the one thing that struck me the most. It’s funny. Really funny. Now you can tell from the trailers that this was going to be more lighthearted than the other Marvel films, but in Guardians the humor stands out as its distinguishing factor. Seriously, it’s funny.

But that is not the full extent of the movie, there is action and excitement and melodrama. In fact each character is given just enough pain and sense of loss, each character is just a little broken, and that is what sells the humor. It’s a defense mechanism for people lost in a larger, overwhelming universe. A universe that just got bigger. Guardians of the Galaxy opens a whole mess of doors in the Marvel Cinematic Universe that films will be walking through for a long time to come.

Okay, now is when the spoilers happen. If you have not seen the film and care about such things stop reading now. Go away and watch the movie then come back (it is very good you won’t be sorry). Story continues after the nice little picture of Star-Lord… 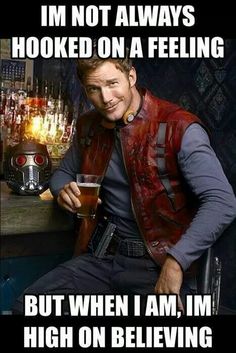 The one thing that Marvel Studios has done right is making the comic book film fun again. Ever since Batman & Robin in 1997 studios seemed reluctant and downright afraid to make a comic book film that was just a fun adventure story. Everything had to be dark and gritty; every character had to be tortured and broken. It had to be difficult, it had to be adult. To be fair Batman & Robin was an abomination that takes years of therapy and aversion treatment to get the horrible images from one’s mind. The dark, gritty reboot was one way of doing that. And for the most part it’s been entertaining. But it runs dry after a while.

The thing Marvel has been able to do so far, and the reason it has been so successful, has been to capture the goofy fun of super heroes and still tell a compelling story; basically the essence of comic books. Marvel’s films are bright and colorful and larger than life. They are adventure and excitement. They are escape and yet compelling. And – this is key – they never forget that they are telling a story. And a long story at that.

Guardians of the Galaxy is the pinnacle of that story telling; a self-contained sci-fi fantasy while at the same time a gateway to a larger narrative. It never stops being an entertaining film on its own, while never losing site of the long game. That is pretty impressive.

How does it move the Marvel Cinematic Universe along? Multiple ways. Here are just a few examples:

Okay, Thor did this with the “realms” but GOTG gets crazy big. It adds Kree and Scrull (although not actually named) and dozens of other races and concepts. The Collector’s lair needs to be poured over for the wealth of crap in there alone. Basically the movie adds huge dimension and depth to an Earth-centric Universe.

Celestials are the giant god-like Kirby creations that are weird and wonderful and confusing. But they are big. As far as storytelling is concerned it opens up massive plotlines to be explored. And the head of one becomes the base for the Guardians, which we saw (sort of) in the film.

First, Thanos looks great. He’s big and heavy, weighty and solid. Like a Kirby drawing (yes I know Kirby didn’t create him but his influence is unmistakable). Thanos is menacing and in control. If the Infinity Gauntlet storyline is to work Thanos needed to be scary. He is.

The Infinity Gems storyline has been teased for the entire Marvel cinematic run; but in Guardians it is finally explained. This will be huge for what we assume will be the Avengers 3 film. So we can expect to see the Guardians, or at least the world they inhabit, play a significant role in future projects.

Cosmo is the Russian space-dog bathed in Cosmic Rays who becomes a psychic, super-smart commander of the Guardians when they take over Nowhere (the Celestial head) as a base of operations. He is notoriously in competition with Rocket; this was hinted at in the movie when the two square off in a staring contest.

Howard the Duck. Really didn’t see that coming. And not 80s George Lucas ridiculous Howard, no this was Howard in all his glory with martini and cigar. Howard is being tossed off as a throw-away gag right now, but I have a bigger theory that I will expound on in a later post – regardless that was fun to see.

The major thing is – you don’t need to know any of this to enjoy this movie. You can go in with absolutely no knowledge of comic books or any of the characters and still have a great time.

As I was leaving the theater after seeing the film a young boy, 8 or 9 maybe, was giddily recapping what we had just seen in a high-pitched, breathless voice. His father laughed and said, “That’s just how I was when I saw Star Wars for the first time.” The kid said without hesitation, “This is my Star Wars!”

That put it in perspective. This was special.

Go see Guardians of the Galaxy. Have fun.