With Star Wars: The Force Awakens premiering on the 18th my nerdself can’t help but obsess in anticipation. So I will be posting several things leading up to the release date.

Way back in the early 1970s, unbelievable as it may seem now, no one wanted to make Star Wars.

Or as it was originally titled: The Adventures of Luke Starkiller, as Taken from the Journal of the Whills, Saga 1: The Star Wars.

Just kinda rolls off the tongue don’t it?

The script, shortened to simply The Star Wars, was shopped around from studio to Studio with little to no interest. This is understandable, at least for the time. SciFi in the 70s was a dismal affair. Not many scifi films were being made and the ones that did were grim, post-apocalyptic things depicting a degrading society and the dark life that awaited us. This was the Watergate era, the time of Vietnam and the disillusionment of status quo and the art reflected the time. The world was just not in the mood for a Flash Gordon/Buck Rogers nostalgia flashback to the old time movie serials.

Well, that was the theory anyway.

Eventually George Lucas was given a chance to pitch his space opera to the executives at Twentieth Century Fox. He had a script, he had enthusiasum, he had a reputation for being an up-and-coming innovative filmmaker. What he didn’t have was visuals. First rule: talent and passion only get you so far, Big Wigs need pretty pictures to seal the deal.

Don’t know McQuarrie? Well you should. The look and feel of Star Wars is in no small way due to the work of this artist.

Lucas knew he needed a visual element to sell the film so he commissioned the illustrator and conceptual designer McQuarrie to illustrate several scenes from the script. Not only did he do that, he knocked it out of the freakin’ park. 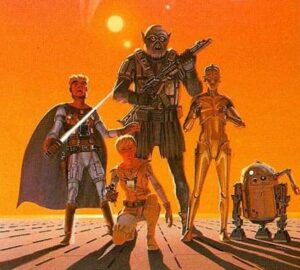 McQuarrie designed most of the major characters from the film including R2-D2, C-3PO, Chewbacca and Darth Vader. It was McQuarrie that suggested Vader’s breathing apparatus and in doing so created something iconic and consequently is solely responsible for spawning millions of terrible heavy breathing impressions. He also created the design of many of the film’s sets and basically developed how the franchise would look for 30 plus years. It might have been Lucas’ vision, but it was McQuarrie’s design.

Of course not all the designs were perfect right off the bat. The first design for Chewbacca for instance was more of a giant elf-goblin that is…interesting. Eventually, with the help of Lucas, he settled in on the familiar ‘walking carpet’ we all know and love today.

Also, everyone carried light sabers including Stormtroopers and that’s just silly. to be fair the mythology wasn’t set in stone yet and was in a bit of a flux so I suppose that could be forgiven. As we all know Lucas would finally settle on a fixed mythology and would not continuously tinker with it and change things and…let’s move on.

McQuarrie would go on to create designs for The Empire Strikes Back and Return of the Jedi as well as the original Battle Star Galactica, Close Encounters of the Third Kind and E.T. and many, many others. But it is these original concept designs that create the legacy. Lucas himself said he probably wouldn’t have convinced the FOX executives to make the film without those images. They are crucial to the history of this movie, a cultural phenomenon now but something that might never have been without a great designer and a great artist.

For me these images are very familiar. Back when Star Wars was everything I had a collectable poster book with this concept reproduced on shiny poster board. I tacked these posters up on on the underside of the top bunk that I shared with my brother. I could look up at them as I drifted off to sleep.

I could drift off to the deserts of Tatooine or float through the corridors of the Death Star. Or fly in an X-Wing duel. Or confront the Dark Lord himself in a battle where the outcome depended only on my purity of spirit. And not being sliced with a light saber.

These images created for me as a child vivid dreams that I still remember. And helped fuel my imagination and push me to create stories of my own.

To know that they also helped create and inspire the film and the filmmakers and were instrumental in getting the movie made in the first place only makes them more special.

This article originally appeared May 4, 2015