King Crimson is probably the band that is most evocative of Progressive Rock. That is to say they have been and continue to be unapologetic prog. There was no decent into pop singles in the 80s, there was no reworking of old material with an orchestra, neither was there a classic reunion tour for an arbitrary anniversary. Instead King Crimson simply trudged along making albums at intervals of their own choosing while switching up styles as inspiration struck.

The band began as a pseudo-psychedelic outfit then took a break before reforming as a jazz fusion group. After another break they came back as an electronic power quartet, and so forth. King Crimson always seemed to be more of an experimental idea than a group. And the variations in their music reinforce that idea.

The members of the band rotated in and out over the years with the constant through line being Robert Fripp. Robert Fripp is one of those eccentric geniuses that tinkers and tweaks so often and so consistently that you don’t know if he’s a perfectionist or simply mad. And King Crimson is most absurdly his baby. It is collaborative in the sense that the various members of the band are encouraged to contribute material and to show off their distinct talents; but the direction of this material and talent is definitely under Fripp’s control.

This approach is dictatorial but not unwelcome. Bill Bruford has said that he left Yes because their approach to creating music was loose and undefined. He came to King Crimson – and Fripp – for discipline and a firm hand. This firm hand gives King Crimson an unusual sound and feel. It is improvisational but there are strict controls on the direction of that improvisation, defined limits to where and how the improv goes.

This controlled improvisation is on full display on Lark’s Tongues in Aspic. 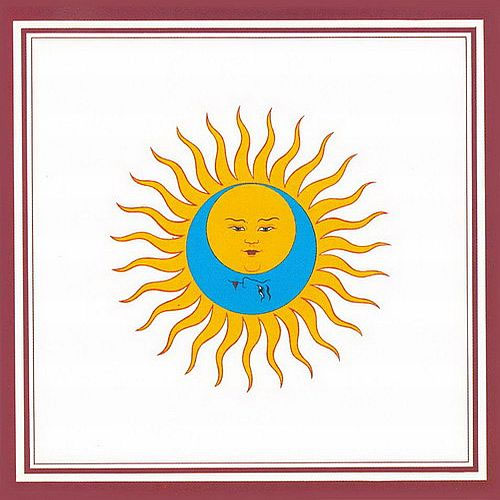 Lark’s Tongues in Aspic, released in 1974, is the third (maybe fourth depending on how you reckon) iteration of the group. After a brief hiatus the band came back with Fripp leading a more jazz oriented lineup with the interesting addition of violin to the standard bass, guitar, drums and percussion.

In mentioned in my last article on Close to the Edge that prog rock typically falls into two categories: melodic and discordant. King Crimson for the most part falls into the latter. And Lark’s Tongues in Aspic showcases that discordant sound to a great degree. But, as there are always exceptions to every rule, there are really quite beautiful, melodic songs nested between the bombast.

1. Lark’s Tongues in Aspic, Part One (13:75)
The album is book-ended by this extended experimental jazz-scape. It begins with a long, protracted percussion section before exploding into a pounding, almost hard rock sounding rhythm. The piece then settles into a long violin section by David Cross that slowly begins to break down into a disjointed noise that is combined with Fripp’s guitar in a sonic battle that eventually crescendos in a cacophonous crazy jam that then gently fades away…

2. Book of Saturday (2:56)
Beautiful, lilting and just a bit sorrowful. Fripp’s guitar licks are have and otherworldly twang while John Wetton’s voice captures the loss and sadness inherent in the music and lyrics. Just a nice song.

3. Exiles (7:41)
Another soft, lilting song. It begins first with a long, slow percussion into but when the song proper finally breaks in we are treated to beautiful vocals by Wetton and the souring, electronic guitar sound that Fripp is famous for; a lovely way to end side one.

4. Easy Money (7:53)
Probably the closest thing to a straight up rock song the album has. A pounding guitar and bombastic drums drive this hard rocker, occasionally broken up with funky solos and long jams.

5. The Talking Drum (7:26)
As the name implies this is percussion heavy. Pounding, incessant, almost tribal – the drums carry us along as a violin winds its way through the beat. A seven and a half minute head pounder. I wouldn’t be surprised if Primus was seriously influenced by this one.

6. Lark’s Tongues in Aspic, Part Two(7:07)
And finally a refrain of the opener. This time it is non-stop and relentless. Recalling themes of part one but this time there is no soft lead-in or lilting violin solo. No, this time Fripp and company just hit you heard with everything they got. The guitar is driving, the drums and percussion off-beat and loud with whistles and basically horns honking in the background, and the bass is hammering away as that violin scrapes out its notes. It is a frenzy of sound, a sonic wall that just keeps coming. And yet there is a beautiful rhythm to it all. And then it comes crashing to a halt and we are left in the afterglow of something we are not quite sure how to describe but we know it was something special.

I can’t say that Lark’s Tongues in Aspic is my favorite King Crimson album – there are others that I personally find more appealing – but it is one that think showcases the band at their innovative and improvisational best. This album in my mind truly sums up what King Crimson is – gorgeous melodies wrapped in off beats and strange time and cacophonous extremes punctuated by beauty. As far as Progressive Rock goes this band it at the top for epitomizing what can be done with the music and staying true to the spirit of experimentation that the drives it. In the world of Prog, Crimson is king.

Next time – A Flower!: Genesis’s Foxtrot