Close to the Edge: Yes: Difficult Beauty I

I begin this journey into Progressive Rock with the album that I feel is the quintessential example of the genre. Yes’ fifth release typifies the aspects of what makes great Prog Rock.  It executes the characteristics of the form perfectly and combines the musical experimentation and instrumentation into what I consider one of the closest any group has gotten to a perfect album.

Before I begin talking about the songs themselves I suppose I should explain what I mean when I say musical characteristics, experimentation and instrumentation so you can get an idea of what it is that I find so compelling about this music.

First of all I feel Progressive Rock falls into two categories: melodic or discordant.

(Disclaimer: these are my terms. Someone with a more academic background in music theory or criticism may find these reductive or simplistic but this is how I categorize types of prog from years of listening. It is, for me, an easy shorthand to talk about really complex musical styles.)

Melodic Prog Rock is something typified by bands like Yes and Genesis. It is a style that uses classical forms and structure that produces souring symphonic passages and lovely pastoral melodies.

Discordant Prog Rock on the other hand is something that plays with sound and structure. It wants to push the music into to raw sound producing a pounding, almost cacophonic noise that still uses the structure of classical music combined with the experimentation and improvisation of Jazz. You can see this type in bands like King Crimson, Soft Machine and ELP.

But this is not to say that the bands I mentioned above are bound by those styles. King Crimson for example (more on them in the next article) while producing some of the most sonically challenging music in the genre have also made some wildly beautiful melodies.

Similarly, while focusing primarily on harmony and melody, Yes have made songs that are rough and challenging experimenting with sound and time and structure.

No band neatly falls into one category completely but for the most part they do have a primary focus.

Also, what makes Prog Rock distinctive is its experimentation. It uses different time signatures, utilities Classical music’s style in form and structure, tries to include instruments and equipment not typically used in rock and roll, and attempts to push the the boundaries of musical composition in terms of sound and structure.

Close to the Edge does all of these things and does them with a level of precision and perfection that is in my opinion quite astounding.

The recording of Close to the Edge was by all accounts difficult. This was a band at the height of its talents and was willing to obsess over every detail in writing, production, and recording. Jon Anderson and Chris Squire became the source of particular disquiet in the group managing all aspects of the process to the point of putting everything up for democratic vote including chose of instruments, composition, which tracks to use, etc. making each member of the band campaign for their choice. This process was difficult, time consuming and frustrating.  As Chris Welch, Melody Maker reporter and band biographer, described as he visited the studio to observe the recording progress during their month of recording:

… a stressful atmosphere, coupled with “outbursts of anarchy” from Bruford, Howe and Wakeman and disagreement from each member after one mix of a song section was complete. Welch sensed the band were not a cohesive unit, with Anderson and Howe the only ones who knew what direction the album was to take, leaving the rest adding bits and pieces “to a vast jigsaw of sound”, to which Squire and Offord were the two who helped put their idea into shape. Wakeman and Bruford, to Welch, remained “innocent bystanders” in the matter.   (Source: Wikipedia)

Bill Bruford said he proposed the the album’s title to reflect the state of the band at the time. Whether because of or in spite of this difficulty there is no doubt that what was produced was one of the best albums of Progressive Rock ever made. 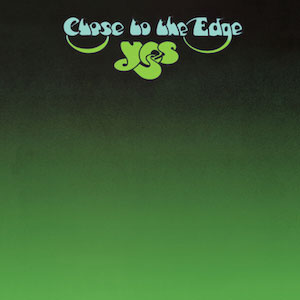 The album itself consists of three tracks. It opens with a side-long mega song of 18 minutes and two “shorter” ones of roughly 10 minutes each. This is a somewhat typical setup for a Prog Rock album with one side consisting of a collection shorter songs with an epic-like composition taking up the entire other side. There are many variations on this structure of course but this was fairly common for the time.

The title track Close to the Edge runs for 18 minutes and twelve minutes and consists of four movements: I. “The Solid Time of Change”,  II. “Total Mass Retain”,  III. “I Get Up, I Get Down”,  IV. “Seasons of Man”.

1. Close to the Edge

It begins slowly with nature sounds slowly building; birds chirping combined with the beginnings of the instruments starting to play. Just random notes at first chirping like the birds and rushing like the swirling winds. Then suddenly as the sounds build to peak volume the song crashes in upon you, a melody of disjointed patterns at first loud and hammering until the harmony of a vocal ties it all together into the rhythm of the first movement.

The music now is lilting and the lyrics are seemingly random, poetic, almost mystical ending in variations of a chorus:

This leads directly into the second movement which is a variation on the theme of the first with a jangly guitar riff and a happy, almost whimsical keyboard line that adds a jaunty feel to the song while at the same time the lyrics seem to go darker, spreading an ominous tone over the joyous feel.

Then the song drops down to a slow dirge. The keyboard now becomes church pipe organ and the lyrics add to that feel with echoes of Christion iconography and sermon-like passages.

Lulled into a passive relaxation the song then throws us into a fast, powerful call back to the original theme. It quickens the pace and hits us with constantly growing sound – pounding and relentless – the lyrics restating what has been said but now more earnest and eager and when at last we are almost overpowered by the building tension we are released with an almost rapturous crescendo…

Seasons will pass you by, now that it’s all over and done
Called to the seed, right to the sun, now that you find, now that you’re whole

And the song then slowly fades out overwhelmed by the nature sounds and bird calls it came in on.

This song is perfect.

Side two consists of two songs of roughly equal length.

It begins with what sounds like the tuning of a guitar that seamlessly flows into the opening riff. It is another jangly guitar riff that is quickly followed by a lovely keyboard melody.

The song has the feel of a love song – albeit an epic one that switches from a lively tune to souring, euphoric passages then back to a happy tune again. The transitions are seamless and guide you through the feel and texture of the song. And that feel is definitely one of love – but is it romantic love of something more? Again there is a feeling of mysticism here, as if we are invited to be inlove with something more, a higher power maybe.

Or perhaps the higher power is love itself.

This song runs for 8 minutes and 55 seconds and is the most straightforward of the songs on the album. It too has several movements but not nearly as pronounced. It is a powerful rock song – well at least as close as Yes can come to that at this time. It starts with a with a strong introductory guitar riff that will be the basis of the structure as the song winds its way through various solos and musical interludes until concluding with a restatement of the opening. All the while the lyrics are just as obscure and mystical as the rest of the album.

The above descriptions are of course my interpretations of the songs on this album. Your thoughts may vary.

I bought my fist copy of this album on vinyl when I was twelve and I have never been without a copy. Whether it has been on vinyl, cassette, 8-track (yes, I actually had an 8-track copy of this), CD, or MP3 I have been listening to Close to the Edge at least once a month (more often than not one a week)  for my entire life. As I have said I find this to be one of the most beautiful, challenging, and endlessly enjoyably pieces of music ever composed. I think it was this album more than any other that got me interested in Progressive Rock in general and really thinking about music as a whole.

I highly recommend picking up a copy or at least giving it a listen with an open mind. It has the possibility of changing how you think about the genre and sparking a love for a form of music that you might not have given much though.

Next time I will discuss something a bit more esoteric: King Crimson’s Lark’s Tongues in Aspic