It Is What It Is: King Kong Escapes: Kong Hits V

King Kong Escapes is one of – if not the – strangest entries in the King Kong cannon. (As an aside saying ‘King Kong cannon’ out loud is a fun thing to do. Go ahead, try it.) But if you unpack what this movie is it is a wonder that it even exists.

That, my friends, is really weird.

It is a hodgepodge of genres mashed up and filled with stereotypical characters, stilted dialogue, a nonsensical plot, and low budget effect that are borderline laughable. But the really funny thing? It’s actually kind of awesome.

I’ll explain the reason for that in a moment, but I should take the time to give a brief synopsis in order to highlight what a bizarre creature this movie is.

King Kong Escapes is a 1967 Toho Studios film made in collaboration with Rankin bass productions. It follows submarine commander Carl Nelson and his assistants Lt. Susan Watson and Lt. Commander Jiro Nomura as the three set off to Mondo Island – the home of King Kong – to check up on things because keeping tabs on a giant gorilla is a pretty good idea. Soon Susan Watson becomes the Fay Rae stand-in where Kong falls in love with her and then battles with Gorosaurus (think T-rex) and a sea serpent to keep her safe. Carl Nelson is the same character from the animated series although in the series he has a family and they are missing here – let’s assume they are just at home.

Also from the animated series is the movie’s villain – Dr. Who. (No, not that Dr. Who.) Dr. Who is a b-list James Bond bad guy who has a plan to dig up the radioactive Element X at the North Pole so he builds a giant mechanical replica of King Kong to do it for him. This may seem a bit odd, building a giant metal gorilla to dig up your rare metal ore for you instead of, you know, a drill. But hey, if you got the chance to build a giant gorilla robot wouldn’t you? You know you would.

Well the robot gets fried because of the radioactivity so Dr. Who and his assistant Madame Piranha (not making this up) capture the real King Kong and make him dig up the Element X. But – look at the title – King Kong escapes. Who and Piranha kidnap Susan Watson to make Kong comply because of the whole love thing.

Eventually Kong swims to Tokyo and fights the Mechani-Kong (that’s what they call it) in a climactic battle climbing Tokyo Tower. Susan Watson is saved, Madame Piranha repents, Dr. Who is captured and Carl Nelson stands around being all heroic despite not really doing anything. The end. 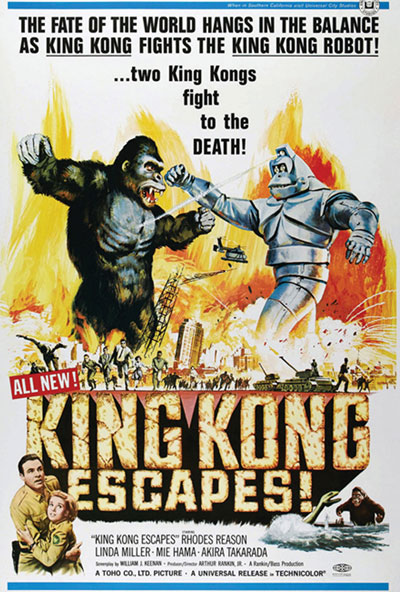 Toho Studios – Rankin/Bass
“It’s very easy for us to understand. You see, as ridiculous as it may sound, Kong is a male and, uh, Miss Watson is… Well, see for yourselves, gentlemen.” – Commander Carl Nelson

Now everything I just related to you is ridiculous. It makes no sense and there are moments that are outright cringeworthy. The knee-jerk reaction to a film like this is to just tear it apart. I could simply go to town criticizing the obvious rubber suits of the monsters or the obviously fake model toys that are supposed to be real helicopters and ships. I could rip into the dialogue, pointing out how wooden the delivery is, and how downright camp the portrayals are. I could deconstruct this movie a dozen different ways and each one would be more devastating than the next.

But that would be missing the point of this movie.

And the point of this movie is that there is no point to this movie.

This is a movie based on a children’s animated TV series that was targeted at kids in single digits. This is the cinematic equivalent of taking all your toys to the sandbox and smashing them together. To attempt to critique King Kong Escapes as if this were a serious genre film or to hold it to the same standard as say Star Wars (or hell even Transformers) is to not do justice to what the movie intends to be. And what this intends to be is a live action Saturday morning cartoon. It is grown men in rubber suits stomping on model houses. It is over-the-top, camp performances, with actors spouting easy to digest sentences so that seven year olds can follow the barely defined story till the men in rubber suits come back to stomp things again. It is supposed to be fun – nothing more, nothing less.

It is common practice these days to accentuate the negative. Criticism in recent years has been an exercise in highlighting the bad aspects of a film or TV show and to point out supposed “plot holes” and mistakes the creators have made. The general theme of many modern critiques seems to start with the idea that whatever it is you are watching sucks and this is why.

This is in my opinion incredibly reductive. It holds everything to the same standard and does not make exceptions for intended audience or take into account what the filmmaker’s intent is or what the goal of the movie simply is.

And that is just too bad, because to just heap negativity on something is to miss something fundamental. There is a lot of entertainment to be gleaned from media if you simply take it on its own merits and not place upon it standards that it was never trying to achieve. Look, I’m not going to attempt to sell you on the fact that King Kong Escapes is high art. I mean I don’t even think it’s a good movie. But it is fun.

I say all this because when I began watching this movie my initial reaction was that of negativity. In the guise of being funny I had intended to just point out the negative – it was the simple and easy approach. But somewhere in the middle of watching this I stopped seeing it with the eyes of a grownup – with the eyes of negativity – and I started to see it as I did when I was a kid. I remembered those times when I was sitting too close to the screen with a bowl of popcorn and a handful of Twizzlers and a fizzy drink and a huge smile; this is the mindset you need to be in to truly appreciate this movie.

Because silly people saying silly things and being silly in a silly movie is fun. Because giant monsters punching giant robots is cool. Because being a kid, especially when you aren’t one, is necessary form time to time.

King Kong Escapes is a bad movie – this is true – but I’ll be dammed if I won’t watch the hell out of it over and over.  Because it is silly and it is fun and I for one need that sort of thing.

So if you’ll excuse me I need to get a fizzy drink and a bag of Twizzlers…a man in a gorilla costume is waiting.