He Sees You When You’re Sleeping: Krampus the Anti-Claus

We are all familiar with the benevolent nighttime intruder who once a year indulges in mass breaking and entering to deposit gifts under indoor foliage. You know, the omnipotent fat man dressed in red who observes your every waking and sleeping moment to determine if you are “bad” or “good” based on a criteria only known to him. If you really sit down and think about it Santa is a bit creepy. But for the most part what he does is good natured and if you are deemed to be “bad” the worst you can expect is a lump of coal in a fancy sock. Right?

You see there is a flip-side to Santa; an anti-Claus. And you better be good for goodness sake because you could be taken away in a sack to an undisclosed location to spend your life in darkness and misery.

Now I know what you’re thinking, is it Dick Cheney? No, believe it or not, it’s even worse than him. 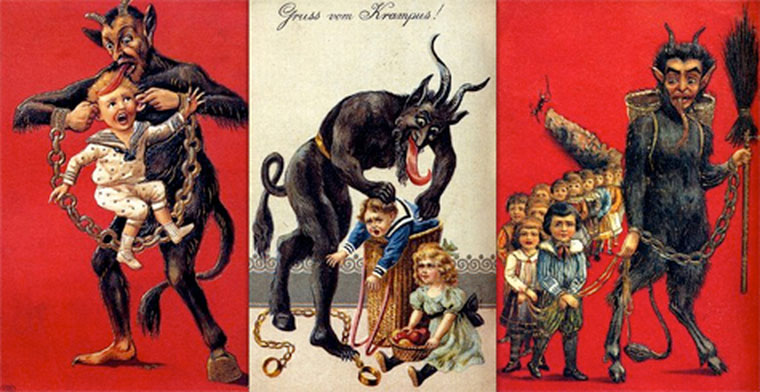 Krampus, for the uninitiated, is a large individual with black, matted fur and goat horns and cloven hooves. He carries on his back a wicker basket full of unbreakable birch sticks. If you are child around Christmas time and have been ungrateful Krampus will sneak into your house and whip you with the sticks. No gifts of course. But don’t complain, if you are whipped you’re getting off easy. Because if you are really bad you get carried away in that basket to be devoured at a later time. Yes, Krampus is sometimes called the “giddy child eater.” Somehow the addition of the word “giddy” makes it even more terrifying.

Krampus is known to run through the streets at night and announce his presence by rattling chains and ringing rusty bells. If you come across him it is customary to offer him schnapps. This is because large devil creatures apparently enjoy a strong distilled fruit brandy. To be fair, who doesn’t really?

Krampus also occasionally pursues buxom women. One can assume he offers them schnapps. 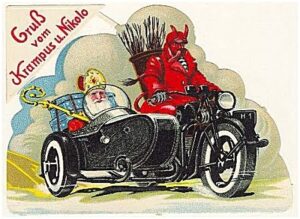 But of course Krampus’ main job is the torture and terrorizing of children, something it is said at which he excels. And he is often seen paling around with his counterpart Santa. They seem to get on very well. Now it is never explicitly stated but I have a theory that Santa must share the information he’s been gathering all year. I figure Santa is like the NSA gathering naughty and nice Intel throughout the year which he then turns over to the Punishment department just before Christmas Eve.

Again, this is just speculation.

In the end the whole “be good or you don’t get a gift” idea takes on and entirely different meaning when you consider the Krampus side of the equation.

So remember, if you wake on Christmas morning to find a big lump of coal in your stocking breathe a sigh of relief.

You got off easy.