Welcome back to the Long Lost Longbox. We continue with Black Orchid and a look at the artists on the book.

The artists on Black Orchid are both quite good. Outstanding actually.

I first became familiar with the cover artist Dave McKean through his work on Sandman with Neil Gaiman in the late 80s. His work, to me, was stunning. It was something I’d never seen before, especially in comics. Unique and surreal, his images are visceral and dreamlike. He works in oil and photography, charcoal and pencil, collages and found objects and digital manipulation. You can always tell a McKean cover, there is really no one like him. I’ve always been moved by his work and continue to be a fan whether it is in comics or film or any of the multitudes of other projects and media he’s worked in.

His work on Black Orchid is really a continuation of his work on Sandman; or at least his collaboration with Gaiman. I described it as dreamlike and surreal and this is generally apt, but he also seems to incorporate just the right elements of the story to invoke its essence. Even if the work inside was not up to snuff the covers are worth the cover price in and of themselves. But the work inside is quite good as well.

The penciler, or main artist on the book, is Rebecca Guay and I will admit that this is the first time I’ve seen her work. My first impression is that it has a fluidity to it; a kid of fairy-tale quality. It gives the comic that storybook feel; like it is something very old while at the same time the story itself is very modern. That adds to the effectiveness of the book itself. Even when the plot is moving quickly with a lot of exposition and multiple characters in multiple plotlines Quay is able to carry us along and keep all the disparate threads together without the reader getting lost. I came at this comic with no knowledge of it and basically jumping right into the middle of a storyline and was still able to pick up on it with no problem. This is in no small part due to the way the art engages us and moves us to read on.

That brings us to… 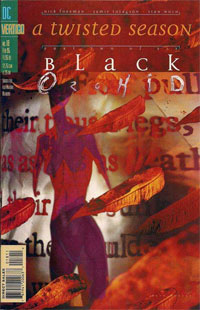 Previously on the LLL: Flora Black Orchid is planting groves of doom while Suzy Black Orchid has to find a way to stop her.

A naked female figure stands silhouetted on a background of typed letters while feathers fall from the sky before her. The predominate colors are red and orange, the colors of autumn when the plants are dying.

Yet it is also the color of love.

Black Orchid (Flora) returns from Africa to New York feeling both confused and full of anger. She spends weeks wondering her home before finally collapsing in the attic. Meanwhile her brainwashed manservant, Weems, falls further into madness. Eventually he discovers Black Orchid in the attic with a tree growing from her back. Immediately Weems chainsaws it off her body and plants it in a garden.

In another part of town Nick arrives in New York with two Leimoiads and meets with Tanawah. They set off to find Black Orchid.

At the same time in the realm of the horae Black Orchid (Suzy) grapples with the idea of identity. She is Black Orchid and Flora is Black Orchid and they are the same but they are different in the same way the horae are multiple entities but only one. The horae want Suzy to help them but Suzy, feeling confident for the first time, tells them they must make a deal first. What the deal will be remains to be seen.

Back in New York Nick and Tanawah confront Black Orchid (Flora) while Weems holds a shotgun on them. Flora tells them she intends to usurp nature herself and become the creator of life on the planet as well as removing the human blight from the earth in order to heal it. Nick as you can imagine does not take to this and threatens to destroy Flora’s groves and is shot by Weems for his trouble. Tanawah attempts to convince Flora of the error of her ways but finds Flora is overwhelmingly powerful now and is forced to simply slink away.

In a final reveal we find that the tree cut from Flora’s back was actually her compassion and love. Now she is free to feel only anger.

A lot of exposition in this one. It does not feel overwhelming or unnecessary however, everything said is needed to advance the story and it is told in an interesting way with good visuals. A bit short on action though.

With the exception of Nick’s shooting not a lot really happened. Yes we get information on the character’s internal states; the insight in to Weems’ madness is disturbing and rather moving for instance, but there is quite a bit of standing around and examining empty rooms.

I realize this is all set up for the next issue. Suzy is about ready to stand up for herself and Flora is all ready to be a badass; a confrontation is all but inevitable. But I can’t help but think if I was buying this monthly I would have felt a bit let down. It is a middle issue, treading water till next month.

Actually that’s not fair. There was world-building and some nice character insights as I mentioned. And overall it is well written and it is a very pretty comic. Still, I wasn’t left with that big ‘wow’ moment. Although it has been set up and we know it’s coming.

Next time on an all new episode of Long Lost Longbox: Black Orchid #20, a big jump missing two issues in this arc, how will we cope? Also a look at the writer of this arc as well.