On the most recent episode of the Collected Edition I and my co-host Brian Reese discuss the classic Spider-Man story Kraven’s Last Hunt also known as “Fearful Symmetry” the title of which comes from the 1794 poem by William Blake called The Tyger. After recording the episode I was compelled to dig out my William Blake collection and read the poem again and as always it does not disappoint.

The Tyger is one of the best known of Blake’s poems and one of the few to actually gain some notoriety during his lifetime. A deceptively simple poem of the surface – just six stanzas four lines long in a basic meter – but it belies a deeper meaning within it. Blake was a poet, painter, and print-maker with philosophical and mystical leanings. (In fact his books combine art and prose in such an intricate and complex way you could say Blake was the first graphic novelist and possibly the inventor of comics.) Although largely unnoticed in his day he has since become recognized as one of the most powerful and profound writers of the Romantic Age (or perhaps pre-Romantic Age if you want to get technical, which I don’t).  Now Blake’s ideas and themes are far to complex and nuanced to do justice in this short synopsis, but that being said I will attempt something brief in order to give some background on The Tyger.

The Tyger was first published in Blake’s book Songs of Experience and contains a companion piece – The Lamb – which appears earlier in the earlier book. Both poems deal God’s meaning and reason for creation. The Lamb takes a more innocent view of God’s work in emphasizing the gentle and tender version of the world. While the Tyger by contrast wonders why God chose to create dangerous and violent things. It is framed as a series of questions, almost accusations, toward the creator. It wonders how a loving God could on the one hand create the meek and mild Lamb and also make the terrible and fearsome Tiger. God here is seen as a craftsman who forges the world and the animals and so has reason for everything He does. But what is that meaning? Is it just symmetry? If there is innocence there must in turn be corruption? If there is peace must be be violence as well? Or is there some other reason behind it, a reason we are not meant to understand?

The poem offers no answer to these questions but rather invites us to pose more questions and to contemplate what it means to live in a world that both overwhelms us with beauty and oppresses us with horror. And it asks us to wonder what kind of a creator – what kind of parent – would allow this or indeed purposefully intend such a world.

Of course this is just one interpretation – the more you read the poem the more ideas and themes arise. It could be seen as a metaphor on the act of creation itself or possibly a metaphysical meditation on one’s inner conflicts, a symbolic representation of duality and psychological turmoil.

This poem has inspired many over the years in various mediums – paintings, novels, essays  – right up to a modern Spider-Man comic.  The poem is below so give it a read and come up with your own thoughts on what it means. And maybe The Tyger will inspire you to write your own story and your own interpretation.

The Tyger
by William Blake 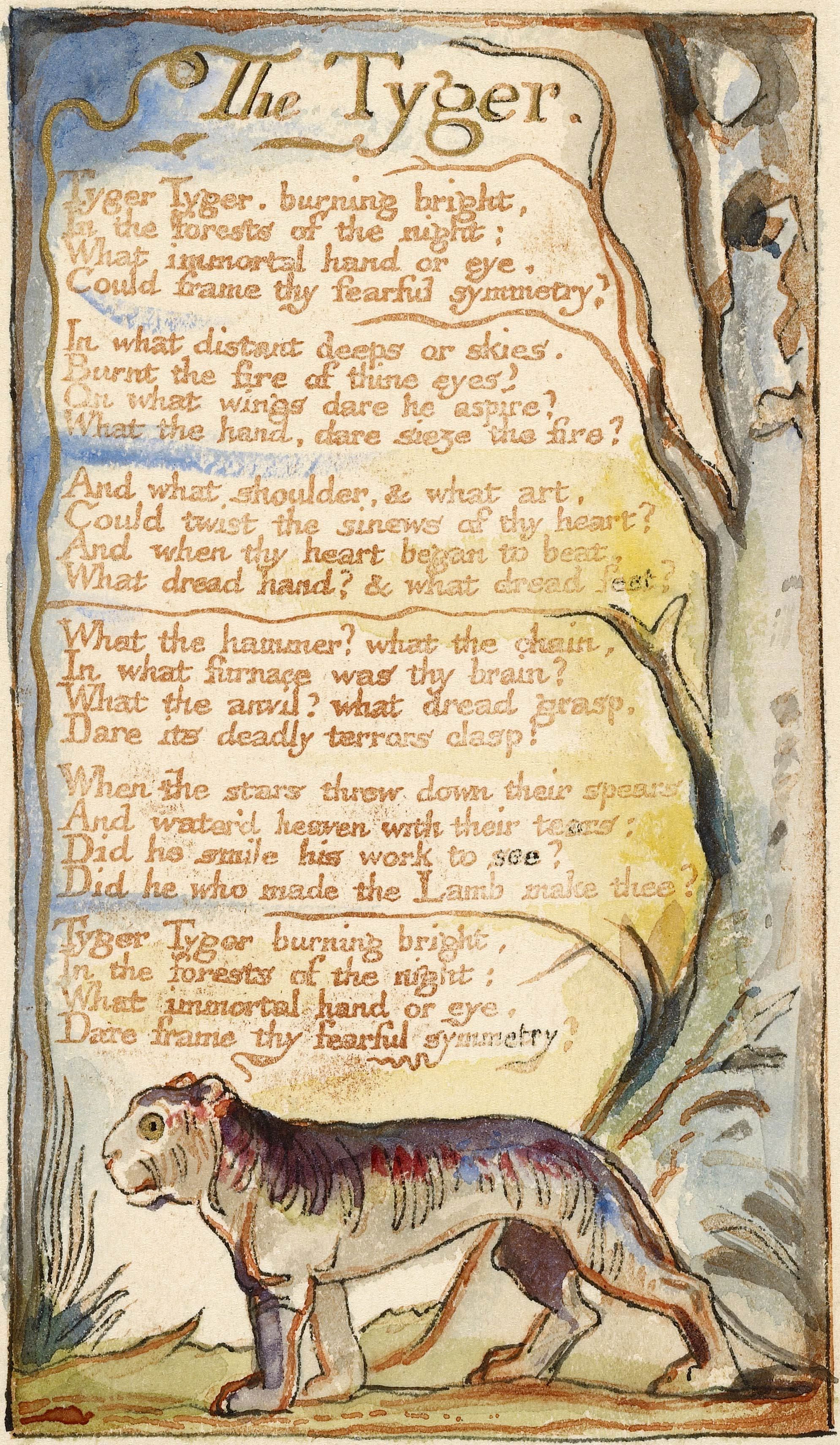 Tyger Tyger burning bright,
In the forests of the night;
What immortal hand or eye,
Could frame thy fearful symmetry?

In what distant deeps or skies.
Burnt the fire of thine eyes?
On what wings dare he aspire?
What the hand, dare seize the fire?

And what shoulder, & what art,
Could twist the sinews of thy heart?
And when thy heart began to beat,
What dread hand? & what dread feet?

What the hammer? what the chain,
In what furnace was thy brain?
What the anvil? what dread grasp,
Dare its deadly terrors clasp!

When the stars threw down their spears
And water’d heaven with their tears:
Did he smile his work to see?
Did he who made the Lamb make thee?

Tyger Tyger burning bright,
In the forests of the night:
What immortal hand or eye,
Dare frame thy fearful symmetry?

If you would like to listen to the Collected Edition episode where this is talked about you can do that here: