Welcome back to the Long Lost Longbox. If you think it’s been a while since the last entry, you are absolutely correct. But never fear we continue the epic journey through the Books of Magic and some trouble in the sewers.

In order to understand what is going on in The Books of Magic at this time you really need to know about The Children’s Crusade. The next few issues piggy-back off this and rely on characters and concepts introduced there. The Children’s Crusade was a seven issue crossover event in the Vertigo line. It was the first time Vertigo would do a crossover and, as it happens, the last as well. The first and last issues were bookends written by Neil Gaiman and Alisa Kwitney. The remaining issues were annuals for Black Orchid, Animal Man, Swamp Thing, Doom Patrol and Arcana Annual #1. This last one is what concerns us because Arcana Annual #1 was basically the Books of Magic without the name. It is what led to the ongoing series that we are reading now.

Not to get too deep into the overall storyline of The Children’s Crusade it essentially deals with the ghosts of two boys who become detectives and attempt to find a group of missing children. These children have been taken to a place called “Free Country”.

Free Country is a place where children never grow old and are free from the abuse of adults. There is of course a dark secret there. In the Arcana Annual we are reintroduced to Timothy Hunter and we meet a dancer called Marya and her admirer Daniel from Free Country. The three, along with several other characters from the Vertigo world, attempt to heal the trouble in Free Country. Along the way Marya stays behind in the “real world” to peruse her dream of being a “real” dancer. And Daniel stays in Free Country and Timothy finally accepts the fact that he is magic.

This is a ridiculously brief and, let’s face it lame, synopsis of a rather large and complicated storyline. But to be fair most of what happens in The Children’s Crusade really does not concern us other than to reinforce that this was basically the reboot of The Books of Magic as an ongoing series. Timothy Hunter is positioned as the “greatest magician of his age” and Marya, Daniel and Free Country are introduced. These will all play a part as we go along. That brings us to… 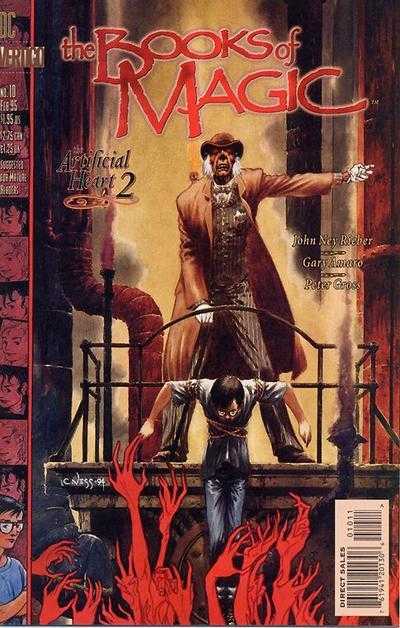 Previously on the LLL: Timothy Hunter gets himself in a kerfuffle and down in the sewers trouble brews.

The cover shows the evil Reverend Slagingham standing over the prone body of Timothy Hunter tied to a railing with his arms outstretched to either side in a really subtle pose. No clue what the artist was going for there. On the bottom red, demonic hands reach up clawing like flames. Again, subtle. Its all very steampunk and creepy and gets the point across.

We open in Faerie where King Auberon is feeling jealousy and is not liking it one bit so heads off to other places to distract himself.

Meanwhile in London below Reverend Slagingham shows Daniel around his steampunk magical factory and attempts to get him to join up as a partner.

Suddenly a unicorn appears which Slagingham claims is due to Timothy Hunter messing about and shoots it with a gun that protrudes from his eye (It should be noted that Reverend Slagingham in seen to be wearing skin “gloves” and that he is mostly machine thus the eye-gun). Upon hearing the name Timothy Hunter, Daniel immediately decides to join up with Slagingham because he feels Hunter has stolen his girl Marya. A claim seemingly confirmed when Slagingham shows him visions of the surface where Marya and Timothy are seen to be in an embrace.

On the surface Timothy is still trying to get the girls unfrozen in time from last issue and discussing magic with Khara and her daughter Nikki. Khara gives Timothy some cryptic advice and lets him borrow some money while Nikki playfully climbs on him and steals his magic stone. Khara tells him that the stone is a powerful magical object and that she must take it away for safe keeping. Timothy asks if he can have it back when he needs it and she responds he can have it back when he doesn’t. She and Nikki then leave Timothy to unfreeze the girls on his own.

In another part of London Auberon arrives thinking he will see an old-timey medieval fair and is shocked to see an industrial park. So taken aback by this he is tricked int buying a ‘soul globe’ from a street merchant girl. The soul globe does exactly what you’d think it would and steals his soul. The girl then leads the soulless faerie down below to work for Slagingham. (dun dun duuuunnn!)

Back with Timothy he does manage to get Mayra and Molly unfrozen in time just as a magically enhanced Daniel shows up to wreak terrible vengeance upon Timothy Hunter.

This is a perfectly serviceable issue. Entertaining, paced well and looks great art-wise. It does feel as if it is treading water a bit though. Which, to be fair, it is. This issue is setting up all the plot points that will come together later in the arc and so has a very open ended feeling where nothing is resolved. Read as a chapter in a novel this works fine, but as a stand alone story it just leaves you hanging, it’s all set up with no conclusion. I don’t mean to say that its bad by any stretch, as I said above a perfectly serviceable issue.

Has nothing to do with the cover though. Or should I say yet maybe?

Next time on an all new episode of Long Lost Longbox: Books of Magic #11, Again, stay strapped in because we’ll be covering Books of Magic for a long, long time. A good thing continues (faster this time).