It’s a brand new year full of possibilities and new opportunities. It is a time to look back at what has been and to look forward to what could be. It is a time to make resolutions. A time make promises to one’s self to do better, work harder, improve ourselves, our habits and our lives.

It is also a time to break those promises and deal with failure while simultaneously rationalizing it to make it seem like that’s what we wanted to do the whole time. It’s a time honored tradition and a problematic one.

For instance one of my resolutions was to write more for this blog and post on a regular basis starting on the 1st of the year. This post you are reading right now is a full 12 days late. So let’s go ahead and assume that this resolution is good and broken. But this is actually a good thing.

See, by creating an arbitrary goal of productivity I create unneeded pressure on myself that in turn stymies my creativity and actually hampers productivity. By releasing myself from that goal I create a relaxed environment and ease of mind that will allow my creativity to flow and productivity to soar. So the best thing I could do for this site is to not have that resolution at all.

See what I did there? Rationalization complete. We have come full circle on a resolution. A resolution resolution. It’s nice to tie up loose ends. In fact I’m going to call it right now – all of my resolutions are officially broken.

They were as follows: 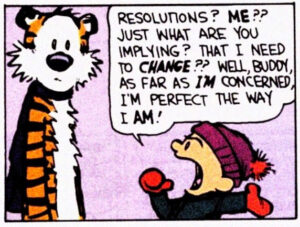 Work Out and Lose Weight. This one is a classic. Its been on the list for decades. This gets put on as a force of habit really, no notion of actually doing it is ever intended anymore. But for a few moments there is that warm feeling you get when you see an old friend after a long time. Rationalization: I’m actually quite comfortable with who I am and I don’t need to conform to society’s idea of what is beautiful. (Again, that’s a classic.)

Become a Multi-Media Superstar. I always like to put one on the list that is realistically unattainable. I figure if you’re gonna fail, fail big. Rationalization: I’m not a sellout, dude. Besides, people just don’t understand my genius, man. No one appreciates how I suffer for my art. I’m just going to sit here in the dark and listen to the Cure.

So that’s it, all of my resolutions broken or abandoned less than two weeks into the New Year. Is that a record? Actually, no.

According to a poll in the UK 86% of people will break their resolutions before the end of the year and 43% of people before a month is out. The numbers are similar in the US, or at least I assume so, I made a resolution to do more research but, you know.

So why do people break their resolutions? The answer: because they want to.

Look, it’s a great to have a goal. It is really nice to aspire to something better, and I wholeheartedly think we should do that, but with the understanding that situations change. We can’t always be perfect, we can alter and change our goals as different situations arise. A resolution should guide us not govern our actions or feelings.

Unfortunately that is not the case for most people. The goals we set for ourselves are theoretically going to make us happier. We look forward to the way we think we are going to feel when that goal is achieved. But the problem when making a “Resolution” is it becomes rigid and inflexible. It becomes an all or nothing proposition. It becomes something that is either attained or something broken. Rather than being content with working incrementally towards happiness we abandon the goal the moment we can’t fulfill it in totality. And that happiness we think we are going to feel turns out to make us unhappy due to an unrealistic and arbitrary notion of what we think will make us happy.

We should set goals for ourselves that are inspirational and work towards them with the knowledge that occasionally we may not get it right. Actually, most of the time. And that’s okay. Happiness is achievable whether a resolution is broken or not.

I resolve to do that next year.