If you’re reading this and you are wondering who Jack Kirby is you obviously don’t read comics. Kirby is one of the most influential artists and creators in the genre, ever. In fact I would go so far as to say a huge swath of the history of comics since the 1960s has been an attempt to emulate or a reaction against his work.

He is highly stylized and easily recognizable. Terms like Kirby Tech (to denote a streamlined, futuristic machine) and Kirby Crackle (a morphing, dotted way to depict energy) are common nomenclature. He pioneered photo collage techniques and innovative ways to depict action and movement. In fact as a kid growing up in the 70s I had a large selection of marvel comics (courtesy of an older brother) and I came to believe that Kirby’s style was the way to draw comics and everyone else was just doing it incorrectly. He has his detractors of course. There are those who feel his anatomy isn’t quite right or his hyper-stylized drawing style is clunky or amateurish. These points are valid because I believe everyone should have a right to their opinion even if those opinions are wrong.

Kirby’s list of credits is ridiculous. He has co-created, written and plotted for the Fantastic Four, Captain America, Thor, Iron Man, Ant-Man, Nick Fury and His Howling Commandos, The Avengers, Black Panther, The Inhumans; basically the core of the Marvel Universe and those are just the highlights.

I had originally thought about doing a post just on Kirby’s work in general but I decided to just focus on one creation to highlight his style. An obvious choice would have been his work with Stan Lee, but instead I chose a somewhat lesser known but still influential work; The Fourth World. 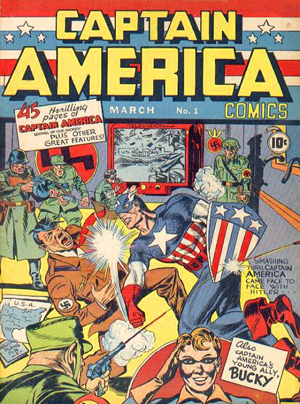 Kirby first gained fame in the mid-1940s when he and Joe Simon created Captain America (a literal all-American hero who fought Nazis and actually punched Hitler in the face) for the then named Timely Comics. With the advent of the Comics Code (that’s a whole post in and of itself) in the 1950s the industry in general stagnated and creativity slogged to all but a halt with generic superhero stories, romance comics, run of the mill westerns and childish comedies. Basically, kid’s stuff.

All that changed at the beginning of the 1960s when Kirby and writer Stan Lee decided to try something new with the genre for the now rechristened Marvel Comics. Kirby and Lee created the Fantastic Four, a superhero team that was also a family and dealt with amazing adventures alongside the day to day lives of normal people who just happened to have extraordinary powers. This was a major success. It ushered in what Stan lee called (in his characteristically subtle way) the Marvel Age of Comics.

Now it can’t be understated what an impact this actually had on the industry. It brought in new readership, both mid to late teens as well as college-age readers. Sales were up, there was favorable criticism and it became a cultural phenomenon. The two followed it up with success after success; just look at that list of credits above to understand just a fraction of what they were doing. And to be fair not everything worked but it was new, it was different and it changed how comics were conceived. They weren’t seen as great literature mind you, but at least that were not just “kid’s stuff” anymore.

By the end of the 1960s however Kirby was beginning to have creative differences with Marvel and Lee in particular. He wanted to branch out, his stories were becoming more “cosmic” and there were ideas he wanted to pursue that he simply wasn’t allowed to pursue in his current position. So at the start of the new decade Kirby jumped ship and went to Marvel’s major competitor DC.

NOTE: This is an extremely abridged version of a very complicated creator relationship. I may at some point attempt to give my opinion about creator ownership and rights and Stan Lee, but right here seems a bit out of place.

Getting Kirby was a huge coup for DC, it was highly publicized and the editors were quick to capitalize on it. His first book was Superman’s Pal Jimmy Olsen, a rather small title but it didn’t have a creative team and Kirby took it so he wouldn’t have anyone lose their job. And may I just stop right here to say, that’s freaking awesome. I would love to be that cool.

It wasn’t long before Kirby started on several linked titles that began to encapsulate his vision. 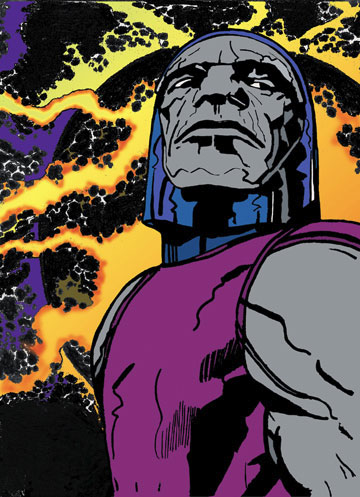 The Fourth World wasn’t actually called Fourth World at the time. Kirby conceived of it as a metaseries, a group of linked titles that told a connected larger story with a complete arc from beginning to end. Kirby had concerns at the time that comics needed a way to distribute itself in ways other than newsstands and comic shops. He conceived of an idea where he could do a serialized story that had a finite run and could be collected in a book form, a trade paperback if you will, and could be sold as a “graphic novel.” Yes, he never actually used those terms. He did however envision what the comic book industry would become in a couple decades time.

So what is the Fourth World? It is three original tiles, The Forever People, Mister Miracle and The New Gods along with Superman’s Pal Jimmy Olsen in a lesser capacity. It deals with the battle of good and evil; a simple enough premise.

There are two worlds: New Genesis and Apokolips. The evil lord of Apokolips is Darkseid and the benevolent ruler of New Genesis is Orion. Darkseid wants to control the universe with “anti-life equation” and control the thoughts of all living beings. Orion of course wants all beings to have free will.

Along the way we meet heroes like the Forever People, a sort of godlike kid gang similar to the Little Rascals, and Mister Miracle, a child raised on Apokolips who overcomes his horrible youth to become a great escape artist and Lightray, a cheerful and optimistic man who can utilize the speed of light but really only wants to solve problems through compromise if possible.

The stories are simultaneously a subversion of the typical superhero tropes (and fantasy tropes for that matter) while adhering to them almost religiously. Kirby is following the stereotypical ideal while at the same time being creative and doing something radically different with them. At this point Kirby has been in the industry for 30+ years, he knows what the images and symbols are, he knows what stories have been told to death and he knows how to subvert those ideas. And how to tell them again, just different this time.

[quote]Kirby’s dramas were staged across Jungian vistas of raw symbol and storm…The Fourth World saga crackles with the voltage of Jack Kirby’s boundless imagination let loose onto paper. — Grant Morrison [/quote] I am reminded of the grant Morrison quote about these stories. He said they were “Jungian vistas of raw symbol and storm” and yes that is exactly what they are. Whether Kirby intended to invoke Jungian archetypes or if it was simply an unintended consequence (which now that I’m thinking about it is actually how Jungian archetypes work, but never mind) the result is the same. We are met with these “New Gods”, uber men and women engaged in the most primal struggles. Think for yourself or be controlled. Or be destroyed.

There is a not so subtle allusion to WWII in all this. Kirby was after all a Jewish man who fought in Europe. Darkseid is very much a fascist analog just on a cosmic scale.

And he was thinking about these stories for a long, long time. He has said he tried to tell the tale or use similar ideas in Thor and the Inhuman titles but was never able to give then full voice. Now, free of the editorial constraints of Marvel, Kirby was able to let loose his grand, cosmic, universal vision.

Not all of it works of course. Kirby’s dialogue is stiff, almost imperial. He does not have the natural rhythm that characterized his earlier collaborations with Lee. And his pacing when engaged in exposition can be glacial at times. But these are minor complaints.

Overall Kirby’s art is impeccable. This is a man at the top of his game. His style has been refined to…well an art form. It is dynamic and heavy, there is weight to his forms and his words. His faces are rugged and beautiful and his backgrounds and rich and vibrant. Even if you didn’t read the story the art could carry you forever.

I first read the Fourth World material late in life, in college, so I don’t have that child-like awe that I have with say, Fantastic Four or Thor. But at the same time I was able to intellectualize these stories. They hit me on a much more “adult” level and perhaps I read too much into them, politically or philosophically, but the nostalgia of Kirby and the maturity of the ideas was something quite special.The images and the ideas conveyed here have stuck with me more than a lot of other works I discovered at the same time, works that were deliberately meant to be deep and unique. And to know Kirby conceived of this decades before…well that’s just amazing.

In the End the Fourth World material isn’t perfect but it is great. And I like It.