The Worst Guy to Have Dinner with in Ancient Greece

Once upon a time there lived a guy named Tantalus who was, for reasons that will become clear, a rather unpleasant fellow.

Tantalus was the king of a place called Sipylus and had a great deal of money so the Gods thought he was cool. He also may have been the son of Zeus. Some say that he wasn’t but if you know anything about the promiscuity of Zeus you can pretty much just assume that yeah, he probably was.

Anyway, Tantalus used to get invited to dinner with the Gods on Mt. Olympus all the time which was a pretty big deal. Even so Tantalus would be a real jerk about it and do jackassy things like steal nectar and ambrosia to take home with him which was really a rude thing to do. Way worse than like, stealing all the sugar packets from Starbucks.

Also, he used to listen to the Gods when they were telling each other secrets and then go back home and gossip to all his bros about it. This was seriously uncool as well. But despite all this the Gods were pretty chill about it. Although these things were insulting and a betrayal of trust and all they figured he was young and rambunctious and would basically grow out of his bad behavior. Oh boy, were they wrong!

Because one day Tantalus gets wind that the Gods are all-knowing and wishing to test this ability gets it in his head to prank them. So Tantalus invites all the Gods to his place for a dinner party. Knowing that human flesh was forbidden food (understatement) Tantalus decides to kill his son Pelops, chop him up, and serve him as the main course. This is what we in modern times call – a really fucking extreme thing to do[1].  Seriously, this is way, way, way worse than stealing sugar packets from Starbucks. In fact how one makes the leap from the equivalent of stealing sugar packet to killing and cooking one’s child is just rather baffling to me. But Tantalus does it and sits back and waits for the Gods to chow down on his son.

The Gods are not fooled by this and rightfully say, “What the fuck Tantalus? I mean what the holy fuck is wrong with you?” And all of them (except one[2]) refuse to eat. Zeus in particular is really pissed off.

So Zeus in a rage kills Tantalus by smashing him on a mountain and then went about destroying everything he ever created including his kingdom (which is a bummer for anyone living in that kingdom but divine retribution is a bitch).  This you would think would be the end of the story – but wait, there’s more!

You see Zeus is not the kind of God that simply stops his punishments with mere death – just ask Prometheus or Sisyphus – when it comes to devising a really good eternal damnation Zeus was one of the more diabolically creative deities.

So down in the underworld Zeus makes sure that Tantalus is always hungry and always thirsty. He then makes Tantalus stand in a river with a fruit tree’s branches hanging just over his head. And for all eternity whenever Tantalus reaches down to drink the water it recedes away from him; and whenever he reaches up to eat the fruit it moves away just out of his grasp. This is why when we torment someone with the sight or promise of something that is unobtainable we call it “tantalizing” in honor of this truly reprehensible dude[3].

So I guess the moral of this story is: if you ever feel the need to kill your children and cook them for a prank – don’t. Seriously, just don’t. I really cannot emphasize this enough. Do not do this. 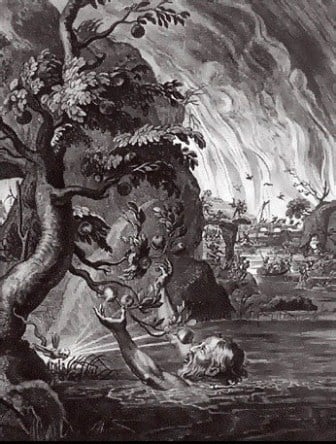 And I saw Tantalus too, bearing endless torture.
He stood erect in a pool as the water lapped his chin—
parched, he burned to drink, but he could not reach the surface,
no, time and again the old man stooped, craving a sip,
time and again the water vanished, swallowed down,
laying bare the caked black earth at his feet—
some spirit drank it dry. And over his head
leafy trees dangled their fruit from high aloft,
pomegranates and pears, and apples glowing red,
succulent figs and olives swelling sleek and dark,
but soon as the old man would strain to clutch them fast
a gust would toss them up to the lowering dark clouds.

[1] This act is described on Wkipedia like this, “The Greeks of classical times claimed to be horrified by Tantalus’s doings; cannibalism and filicide were atrocities and taboo.” This again seems a bit of an understatement. But what gets me is the use of the word “claimed” because this implies that the classical Greeks might have just been faking being horrified.

[2] The only God to eat was Demeter who was really bummed about her daughter Persephone being trapped in the underworld (it’s a long story) and was kinda distracted so she ate some of Pelops’ shoulder. But it’s cool because Zeus eventually gathers up all the remaining pieces of Pelops and puts him back together and brings him back to life. And as for the missing shoulder well Demeter made him a new one out of pure ivory. This opens up a whole new can of worms about the ivory trade – but that’s for another day.

[3] This of course is a flippant retelling of the Tantalus myth and there is much more to this story than what I’ve recounted here. I highly recommend tracking down and reading the full accounts of this and other myths and legends because they are (a) always entertaining and often disturbing and (b) more than likely to give insight into common things we often take for granted. Like the definition of “tantalize” for instance. I recommend the Robert Fagles translation of the Iliad and Odyssey if you need a place to start.