Welcome back to the Long Lost Longbox. We continue with Black Orchid (albeit missing a couple of issues) and a look at who wrote this thing.

Okay, the writer. I am put in a difficult situation. Normally I would do some research (i.e. Google around and eventually end up on Wikipedia) and come up with some general facts about a particular subject and relate those to you in an unique way so as to give the impression that I actually know what I’m talking about. After that I would give my true opinion about how I feel but it would be so buried in the lead that I pretty sure no one really cares or was actually paying attention.

Well I ran into a problem this week.

I can find nothing on Dick Foreman. And I mean nothing. You would think a guy writing pretty high profile comics would at least have a bio or a CV posted somewhere on the nets. Alas no, I got nothing on this guy. So what am I to do? I am forced to use my own creative instincts and actually critique this guy myself. God help me.

All kidding aside my real problem with this is the fact that I have a small sample size. I have basically read three comics by one person with missing issues between and I am supposed to judge and evaluate a man’s style from that. I don’t know if I’m qualified or capable to do that. Granted this is the internet and snap judgments are a thing, actually the norm, but I don’t really feel comfortable doing it. But I will. Cuz its the Internet and that’s what we do.

Dick Foreman is good. Way to go out on a limb huh? But let’s put this in perspective, the top writers at this time were Allan Moore, Grant Morrison and Neil Gaiman. Writers who were post-modern, experimental and pushing the limits of the genre and the medium. On the other end of the scale you have writers who just wanted titillation and violence. I won’t name any names **cough**Liefeld**cough** but taking something and making it “extreme” was the norm and a cool suit and a gun usually passed for storytelling. Now for me to say that someone was a good writer, someone who was just good at what they do and told a good story, is a compliment. And a fine compliment at that.

I have been enjoying the Black Orchid stories. They are solid and engrossing tales. They keep me interested and I am wanting to come back. That, I think, is a great compliment for an author. Do I think Foreman should be in the pantheon of 90s great authors? No. Does her tell a good story and is worthy of a read? Yes.

So I don’t know much about this guy, I don’t know his past or his personal life or even his writing credits. But I do know the stories he’s told me an so far I like what he said. That’s good for now…

That brings us to: 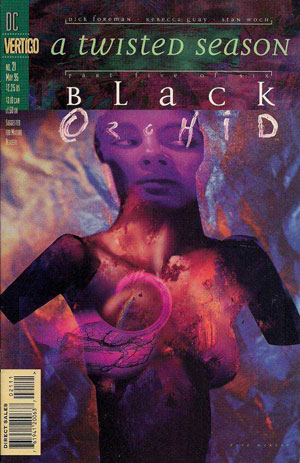 I suppose I should just acknowledge the fact that the covers are just great and leave it at that. But I to be fair this is one of the weaker of the Black Orchid entries. It is still quite good, don’t get me wrong, but for McKean it is average.

A woman’s bust with a superimposed face. Lots of purples and reds and yellow. All very standard fare. Still pretty great, but average.

Suzie-Orchid conspires with Tanawah to bring back the Kobolds to confront Fiona Orchid who has amassed a horde of humans to do her bidding due to her smell hypnosis. Suzy is hesitant but agrees, lesser of evils she assumes.

Meanwhile Weems, still guarding the rapidly growing clipping of Fiona-Orchid, is confronted by a shadowy figure and is killed with a throwing star.

Fiona-Orchid is confronted by the three Kobolds and they attempt to adsorb her energy but her energy seems to be too much and they are overwhelmed. When the Kobolds are defeated Fiona-Orchid addresses her minions and tells them the time has come. The end is near.

Again a very entertaining story. And I acknowledge the fact that I have missed several issues, at the same time there are some aspects that seem a bit rushed and concepts that are taken for granted. The odd thing is this is very deconstructive storytelling. Not much of the plot has advanced other than a few details even though I have missed two issues. The pacing is such that I have not missed any of the plot arc but the story still feel rushed. And the main thing, the Suzy/Fiona confrontation which is inevitable does not seem very close. At least not now. Next issue the arc ends so I assume the Suzy/Fiona standoff will occur, I just hope they have a real battle and not just an”understanding.” The fight has been teased for quite a while now and Fiona’s actions are pretty bad.A hand wave and a blanket forgiveness might not be a satisfying conclusion to this arc. We will see.

Next time on an all new episode of Long Lost Longbox: Black Orchid #22, the last Black Orchid I’ll be covering. Also, a look at how this title fits into the greater DC universe.