Here it is – the very first pull from the Long Lost Longbox. And the issue is…Animal Man #79!

I suppose that whole reveal was given away by the title but still, I like to be dramatic.

So, Animal Man. I’ve never actually read Animal Man. This is kinda exciting. Of course I know about Animal Man, it has a reputation. Grant Morrison’s reboot of the tile is pretty well respected and renowned. That being said, I honestly have no history with the character or the book. Except for a real rudimentary knowledge of the character (that is to say, he’s a man who can do animal things) I will open this issue and be completely surprised by what I see. Haven’t done that in a while. 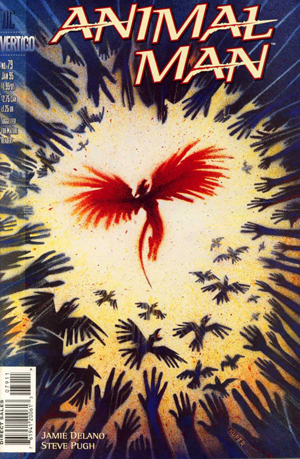 This issue is cover dated January 1995. The writer is Jamie Delano, the artist is Steve Push, Tatjana Wood is colorist and John Costanza letterer.

The cover is simple yet intriguing. On a bright yellow-white background a series of cartoonish hands are ringed in a circle around a group of birds. The birds are themselves cartoonish and their wings and tails resemble the hands surrounding them. In the middle is a human figure with wings and a long tail and a bird-like head. It is very abstract and artistic and gives no indication of the story inside. It is as I said intriguing and something I would be compelled to look at and pick up. This is after all what a cover is supposed to do.

A large group of people and animals arrive in a green valley where a large concert stage is set with a banner reading “Life Power”.

In an abandoned building nearby two women, Ellen and Annie, discuss what is happening with Buddy (Animal Man). There is obviously jealously between the two. Ellen has had a romantic relationship with Buddy and Annie has been sleeping with him and confesses she’s pregnant. This causes Ellen to become extremely sympathetic and caring toward Annie and causes me to realize I have missed quite a large swath of this story and have no clue as to the motivations of these characters. During their conversation it is revealed the “government” has infected Buddy with rabies and in a grand gesture he is going to sacrifice himself to the “Red”. Using context clues I surmise that the “Red” is a mystical force that causes people to become primal/animal/sexy-ish.

Meanwhile in a tour bus an old woman gets naked and hangs out in a hot tub.

Later the crowd is preparing for a concert as a female news reporter is suddenly overcome with sexual sexiness by the Red-ness all around.

A young girl takes the stage. The young girl, Maxine, speaks for Animal Man and tells the crowd that he is pleased with them and wants them to continue what they are doing. She tells them that Animal Man is coming and something “big” is going to happen. She then monologues about celebrating flesh and dancing (picture a creepy Footloose) and then explains the Animal Man won’t be around much longer.

At this point the crowd becomes sexualized and howls and has sex and basically gets wild and stuff and sex. The Animal Man then arrives in the shape of the winged bird-man from the cover and proceeds to get torn apart by all manner of animals including all random birds, a tiger and a bear.

In the aftermath the crowd is satiated and rests peacefully. Ellen and Annie take the sleeping Maxine to the tour bus and end up getting naked with the old woman in the hot tub.

So this is probably not the best issue for me to jump into to begin reading this series. It is obviously the end of a long story arc. I have no idea who these characters are and what their motivations are. The titular character only shows up briefly at the end in bird form to be torn to pieces in a Christ-like sacrifice that makes no sense without prior knowledge of the story. And the women get naked and hang in a hot tub because… shit if I know.

All that being said it was still engaging. The writing was good enough to keep me interested even though I knew I was missing a lot of previous plot and the art was simple but conveyed a subtle creepiness. The bits with Animal Man in bird form were particularly good. There was a regal elegance to him that made the brutality of his sacrifice horrifying and moving.

I wish I had started Animal Man at the beginning of an arc, but them’s the breaks when you have no idea what you will be reading. Still, all-in-all, pretty good start. Wonder what’s next?