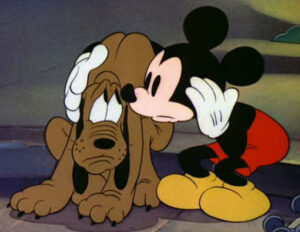 pssst…you’re still not a planet.

It took nine years and traveled over 3.26 billion miles (that’s billion with a “B”) the New Horizons spacecraft made its closest approach to Pluto. It will take New Horizons 16 months to transmit all the data it gathered during the encounter. But it is already sending information back to Earth including the image above which was taken several hours before closest approach. It really is an exciting moment, the farthest voyage of a spacecraft sending information from the very end of our solar system at more than 30,000 miles per hour. I think it’s pretty amazing. Or as a New Horizons team member put it:

“Wow!” said New Horizons principal investigator Alan Stern, Southwest Research Institute, Boulder, Colorado, as the image was unveiled before the New Horizons science team at Johns Hopkins University Applied Physics Laboratory in Laurel, Maryland. “My prediction was that we would find something wonderful, and we did. This is proof that good things really do come in small packages.”

But, it should be noted, even with all this interest in Pluto…it is still not a planet. So, you know, get over it.

Pluto nearly fills the frame in this image from the Long Range Reconnaissance Imager (LORRI) aboard NASA’s New Horizons spacecraft, taken on July 13, 2015 when the spacecraft was 476,000 miles (768,000 kilometers) from the surface. This is the last and most detailed image sent to Earth before the spacecraft’s closest approach to Pluto on July 14. The color image has been combined with lower-resolution color information from the Ralph instrument that was acquired earlier on July 13. This view is dominated by the large, bright feature informally named the “heart,” which measures approximately 1,000 miles (1,600 kilometers) across. The heart borders darker equatorial terrains, and the mottled terrain to its east (right) are complex. However, even at this resolution, much of the heart’s interior appears remarkably featureless—possibly a sign of ongoing geologic processes.

Update from early this morning:

At 7:49 AM EDT on Tuesday, July 14 New Horizons sped past Pluto at 30,800 miles per hour (49,600 kilometers per hour), with a suite of seven science instruments. As planned, New Horizons went incommunicado as it hurtled through the Pluto-Charon system busily gathering data. The New Horizons team will breathe a sigh of relief when New Horizons “phones home” at approximately 9:02 p.m. EDT on July 14. The mission to the icy dwarf planet completes the initial reconnaissance of the solar system.

Here’s the NASA TV video of the event as it happened at ground control: