Jovey McJupiterface (or Ego the Living Planet is Real): NASA Image of the Day

Fist let’s get this out of the way and mention that scientist Jason Major titled this image “Jovey McJupiterface” because scientists are awesome in so, so many ways. 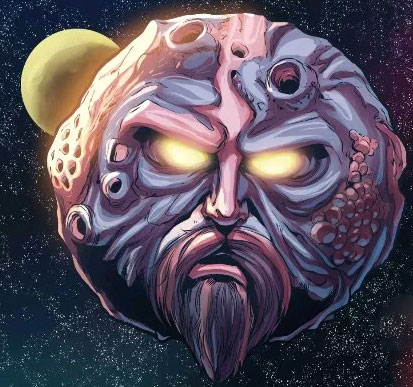 The second thing we need to address is the fact that Ego the Living Planet is real! As everyone knows Ego the Living planet is…well…a living planet. And for years he has been thought to be a fictional character created by Jack Kirby but it actually it turns out that Kirby based his creation on an actual living planet, Jupiter.

The idea that Jupiter was and continues to be a sentient being that may or may not harbor ill will toward all living creatures – humans especially – has been a longtime theory of many scientists. Well, not scientists exactly. What I mean is there have been many respectable individuals that have thought this over the years – and by many I mean just me. It was that one time when we were camping on a “farm” in Humboldt County in the early 90s and the sky was so clear man, I mean you could see all the way to infinity, and that one dude – I think his name was Boomer or Boffer or maybe Steve – had a telescope that we took turns looking through it and we saw Jupiter up there, man, and it was smiling – smiling at me! And I knew – I knew! –  it was alive man – totally alive. And Boomer/Boffer/Steve told me slow down on the tokes dude and … ah, but I’ve said too much …

Anyway, Jupiter is a living planet that looks less like Kurt Russell and more like a character from Adventure Time – which is a bit disappointing – but still a living plant am I right?  No word yet if it has psionic abilities or can emit power beams from it’s eyes powerful enough to destroy whole worlds. But probably.

Also, it could just be an optical illusion based on human being’s pattern recognition ability that allows us to see faces in everything from planets to sand dunes to toast. And that would be boring.

The ‘Face’ of Jupiter

JunoCam images aren’t just for art and science – sometimes they are processed to bring a chuckle.  This image, processed by citizen scientist Jason Major, is titled “Jovey McJupiterface.” By rotating the image 180 degrees and orienting it from south up, two white oval storms turn into eyeballs, and the “face” of Jupiter is revealed.

JunoCam’s raw images are available for the public to peruse and process into image products at:

More information about Juno is at: