Sometimes an episode means well.  It’s hard to criticize something that has its heart in the right place. Still, that can only carry an episode so far. Its flaws, if there are many, will overpower good intentions and leave just a bit of a mess.

So it is with Tattoo, a well-meaning failure.

Tattoo wants to add a much needed backstory for Chakotay, giving him some depth and motivation. It wants to explain his spiritual beliefs and add familial conflict (albeit a father/son you-don’t-understand-me dynamic that should be played out but seems to continue without end) and give some emotional weight to his character.

It wants to do this but it only succeeds slightly. This is the good intentions part. This episode seems so sincere with its attitude toward Chakotay – it is almost tender – but the story just falls apart in a jumble generic “native spirit” and silly von Dänikenism.

Erich von Däniken is the author of Chariots of the Gods the book that put the idea of aliens creating human society in the public consciousness. His premise was that a race of aliens visited Earth at the dawn of human kind and pushed our evolution forward by jump starting civilization. And of course they would come back every now and then to check up on our progress and perhaps give a helping hand. This idea was used to explain everything from the building of the pyramids, the origin of the Greek gods and the appearance of angels in the bible. 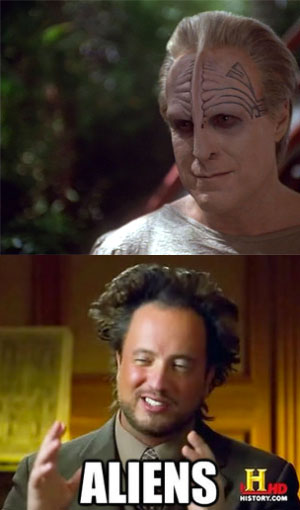 Von Dänikenism was huge in the 70s. Its influence was everywhere. On TV in shows like Doctor Who and The Six million Dollar Man, in novels and short stories and in the comics of Jack Kirby. It seemed there was nothing that couldn’t be explained by just saying, “Aliens did it.”

By the time the 80s rolled around von Dänikenism began to fall out of favor and by the 90s it was pretty much a joke. It began to get popular again in the oughts with shows on the “History” Channel like Ancient Aliens giving the notion some dubious pseudo-scientific explanations.

As far as Star Trek was concerned the notion of aliens creating human society was not really explored. This no doubt has to do with episodes not being made in the 70s when von Dänikenism was at its height, but even more than that was Gene Roddenberry’s vision for the show in the first place.

Roddenberry very much believed in human nature. The whole point of Star trek was that we would get past our childish phase of barbarism and eventually reach a utopian ideal of equality and fairness. Humans, in Roddenberry’s mind, were creative and adaptable. Aliens didn’t build the pyramids –we did because humans are smart and can figure out how to do things without help and outside influences. Yes, we’re a bit aggressive from time to time, but all children are and eventually all children grow up.

Star Trek is about us as a species all grown up.

That’s why Tattoo seems so out of place in the Star Trek worldview. The fact that “sky spirits” came down from outer space to invent Native American religion seems to be in odds with the premise of the whole franchise.

Not to mention the fact that we once again run into a race of aliens that somehow are Earth related even though they are supposedly in an unknown part of the galaxy. I’m all for coincidences but this sort of thing is becoming tedious.

I would rather have seen Chakotay dealing with the death of his father and actually getting the tattoo of the title than just having it hand-waved at the end in order to manufacture a contrived connection with the “Sky Spirits.”

And speaking of contrived, why – just why? – would Janeway order and entire starship to land on a dangerous planet to find one crew member. Yeah, I get that Chakotay is second in command but she is not the type of captain to endanger her entire crew and ship to look for one person. But the ship needed to be in danger to add some stakes to Chakotay’s encounter with the aliens.

All that being said this isn’t bad. Robert Beltran does a good job at conveying confusion, vulnerability and eventually determination. He sometimes gets a bad rap for being bland and boring but I’ve found that he is able to emote quite well while still remaining calm and in control – the defining trait that Chakotay is supposed to have. And it is a nice touch that he wasn’t always Mr. Native American and had to grow into his spirituality as he got older. Still, it would have been nice if they actually showed that.

Also, the B-plot of the Doctor being sick was cute and fun. It wasn’t necessary and served no purpose except to fill time but I won’t complain about more Kes/Doctor interactions.

Next Time On Star Trek Voyager