Death Star Found Near Saturn: NASA Image of the Day 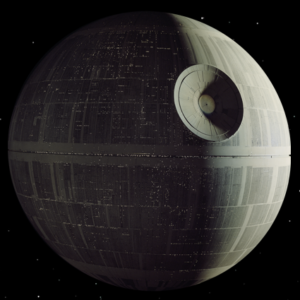 Reportedly after coming out of hyper space the crew of a small space freighter followed a short range fighter toward a small moon prompting one crewman to say, “He’s headed to that small moon.” In response a second member of the crew said, “That’s no moon, that’s a…oh wait it is a moon. My bad.”

But the entire crew did agree that the look of the moon would make a great design for an Orbital Battle Station or “Death Star”.

“Really? Death Star?” said one crew member, “Isn’t that a bit over dramatic? I mean really, how are we going market something called a Death Star? It’ll be a PR nightmare. Can’t we tone it down a bit? Maybe ‘Space Protector’ or ‘Moonbase Freedom Keeper’ you know something without the word death in it?”

“Lame,” replied an obviously high member of the crew, “Death Star sounds awesome dude. Who’s going to be afraid of the ‘Space Protector’? How will we keep the outer planets in line?” He then wandered off in search of more brownies because he totally remembered there were more brownies in the fridge. Or cookies maybe. And blue milk.

This just in: I’m being told nothing reported above actually happened and that I should probably lay off any mind altering substances. But c’mon the resemblance is uncanny right? Maybe its just me then.

Like most moons in the solar system, Saturn’s moon Tethys is covered by impact craters. Some craters bear witness to incredibly violent events, such as the crater Odysseus (seen here at the right of the image).

This view looks toward the anti-Saturn hemisphere of Tethys. North on Tethys is up and rotated 42 degrees to the right.  The image was taken in visible light with the Cassini spacecraft narrow-angle camera on April 11, 2015.

The Cassini mission is a cooperative project of NASA, ESA (the European Space Agency) and the Italian Space Agency. The Jet Propulsion Laboratory, a division of the California Institute of Technology in Pasadena, manages the mission for NASA’s Science Mission Directorate, Washington. The Cassini orbiter and its two onboard cameras were designed, developed and assembled at JPL. The imaging operations center is based at the Space Science Institute in Boulder, Colorado.

For more information about the Cassini-Huygens mission visit https://saturn.jpl.nasa.gov or https://www.nasa.gov/cassini . The Cassini imaging team homepage is at https://ciclops.org.