Brain Salad Surgery is the fourth studio album from prog-rock supergroup Emerson, Lake, & Palmer and is arguably their most well-known. The reason for its notoriety can be boiled down to two things: an unbelievably catchy radio hit and some stunning cover art by H.R. Giger. There’s more to the album of course, but in the non-prog-loving world, I bet those are the things that stand out.

The album was critically mixed when it was released in 1973. Some critics like Pete Erskine called it “a complex, exciting sonic experience which touches on several bases—heavy rock, flowing jazz and some zesty pop material.” While Rolling Stone said the album had “insufficient intensity and lack of worthy material.” Which, in my mind, are both valid takes.

ELP is an easy band to respect but a difficult band to love. And I’m going to be honest here – I’m not the biggest ELP fan. There are things about them that I genuinely love, songs that blow me away in their intricacy and nuance, others that are haunting and moving in the way that only a talented, classically trained trio of musicians can produce. But then there’s the other side of ELP. The over-indulgent, complexity for complexity sake, look-at-me I’m important self-wankery that exemplifies all the bad habits that prog-rock musicians can fall into. ELP can fluctuate between lofty heights of melodic beauty to tedious cacophony in the space of just a few minutes. And it should be noted that your enjoyment of the band will depend significantly on your appreciation of the sound of a Moog synthesizer.

All that being said they are undoubtedly one of the greatest bands the sub-genre ever produced, and I have the utmost awe for their talent. And, don’t get me wrong, there are ELP songs that I adore and could play on endless repeat with no qualms at all. But I don’t think they have an album that I can just play all the way through without skipping a track or two. Brain Salad Surgery comes close to a full play-thru but not quite. Before I talk about the individual tracks I want to quickly talk about that cover art though.

The cover and inner sleeve are works by H.R. Giger – Work 217: ELP I and Work 218: ELP II respectively. The cover depicts a human skull surrounded by and intertwined into industrial machinery with a circular window in the center showing the lower half of a woman’s face. The cover of the LP was split down the middle so that it opened like a gate revealing the full face of a woman with an almost porcelain skin surrounded by hair that resembles mechanical tendrils and a lobotomy scar on her forehead. Like all of Giger’s work is done in a monochromatic style, with a biomechanical, human-industrial integration giving it an otherworldly, macabre, and disturbing beauty. And – if I may say so – it’s amazing. 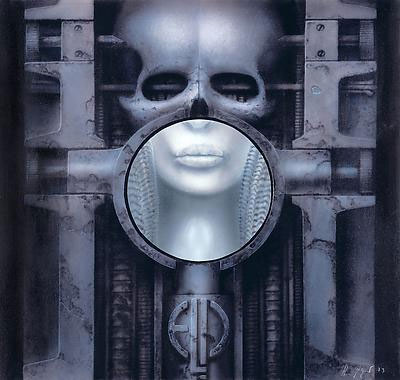 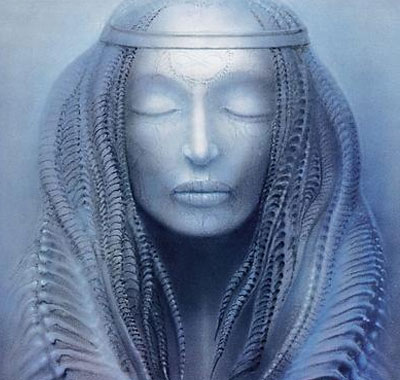 I bought this album as a middle schooler and like many a moody, artistically minded teenager I would pour over the details of this cover reveling in its grotesquery and, if I’m honest, being way too pretentious telling people about the importance of album art and how more people should take it seriously as an art form. I was insufferable.

All that aside it is a truly stunning piece of art, and just as a work of graphic and packaging design it is really impressive. Brain Salad Surgery would be notable just for that alone regardless of the music inside.

But it turns out the music inside is pretty impressive in and of itself.

Yes, the William Blake poem turned reverential hymn is given the ELP treatment. It is sufficiently epic and rather inspirational. This was the first single released for the album, which is…weird. Interesting way to open an album as well. Got to hand it to ELP, they were never conventional in any sense.

An adaptation of Alberto Ginastera’s 1st piano concerto, 4th movement. Yeah, this is where we get into the overindulgence territory. Look, I can appreciate what they are doing here, but I personally find it tedious. This harkens back to Emmerson’s time with the group The Nice, another prog-rock group where they did a lot of this sort of thing – turning classical pieces into rock arrangements. Hey, if you’re into this, that’s great, more power to ya. Me, I’ll skip. Palmer’s drums are quite good though.

A love song with a killer guitar riff. This is moody and sweet and has a great hook. Seems a bit out of place on this album though, doesn’t quite fit the tone or vibe. Also, Emerson and Palmer didn’t play on this – totally a Gregg Lake ditty. Really good song though.

A jaunty honky-tonk, western-inspired bit of fluff. Rolling Stone called this “a needless nonsensical whimsy” and I would have to agree. There was this trend in the late 60s and into the 70s to do throw-back, almost vaudevillian type of songs. Everyone from The Beatles to well, ELP would do these kinds of things with varying results. Like I said, fluff. Skip.

This was meant to be part of the epic that is Side 2 but was split off because of the running time of an LP. I didn’t know this when I was a kid, I just thought it was strange that this was on Side 1 and seems to cut off at the end (but it does get you to flip right away). In later releases and as technology and formats got better this would be restored to the Karn Evil 9 whole.

In the grand tradition of prog-rock, we have an entire album side dedicated to one song. And it is ELP at their best. Split into 3 “impressions” Karn Evil 9 highlights the strengths and talent of all three members in a coherent, sometimes rockin’, sometimes beautiful piece of music that is pure prog and endlessly listenable.

Apparently, it tells the story of a dystopian future where humans and computers fight a war for dominance – which I’ll be honest I never got when listening to this. I always thought it was a metaphor for how entertainment starts to dominate our lives. “Welcome back my friend to the show that never ends…” and all that. But hey, what do I know? Really great and needs to be listened to.

A glorious piece of awesomeness that makes me happy.

A long, extended instrumental interlude that fluctuates between soft piano and intense complicated, almost jazzy improvisations – A great bridge between the first and second impressions while at the same time standing on its own.

Triumphant, filled with fanfare and pageantry. More sci-fi elements are on display here, with computerized effects put on vocals and lots of the war imagery in the lyrics.

This is a great album. (Most of it anyway). Side one is passable with a couple of standouts but the real glory is in Karn Evil 9. This is a classic of prog rock and rightfully so. I mentioned how I am of two minds about ELP, they are obviously talented musicians that can’t be denied, but I do feel their tendencies to excess sometimes cloud their arrangements. That is not the case here, at least with Karn Evil 9. As I said all their strengths are on display and it is a pleasure and a joy to listen to this trio just showcase their virtuoso talents. Combine that with remarkable and influential art and you get a simply wonderful album.