Welcome back to the Long Lost Longbox. Today we begin an epic journey through the Books of Magic. We will be covering issues 8-17, 43-49 and annuals 1 & 2. So yeah, that’s a lot. Best get started.

So it begins, the 19 week exploration of the Books of Magic. This is very exciting. Well, for me anyway. Back in the day I was a huge fan of all things Gaiman. This included his own work and every side project and all sundry related projects. Like the Books of Magic. This was of course during my pretentious phase when I attempted to convince everyone who would listen that comic books were “high art” and should be taken seriously as a literary genre. And Neil Gaiman was my go to guy for this argument.

(Keep in mind I still believe that comic books are “high art” and should be taken seriously as a literary genre, I just don’t obnoxiously try to convince people of this at parties and in bars anymore. No, I have a blog for that sort of thing now. Thank you Internet.)

Gaiman is in the pantheon of comic book writers from the 80s and 90s. He is mentioned in the same breath as Alan Moore and Grant Morrison and Warren Ellis and many others who have changed the genre. The most commonly used words when discussing this is “adult” or “mature” but its more than that.

These writers (and artists) simply evolved the medium in a natural progression; making it more cinematic and using a literary style while at the same time never abandoning what make comics unique. There are certain storytelling techniques that can only be done in sequential art; what these artists did was to realize that and crafted stories that utilized it. These were people who grew up on comics and didn’t hold to the notion that comics were “for kids” and used it express the ideas and tell the stories they wanted to in a medium that they loved. Whether it was a new take on a super hero or a horror story or a classic romance; this new breed of comic book writer expanded the bounds of how comics were perceived.

Gaiman was the most accessible in my opinion. He told stories that drew from mythology and pop culture and blended new ideas with old. He wasn’t as overtly political as Moore or surreal as Morrison or as bat-shit crazy as Ellis. But his stories were still as powerful, his ideas were still as fresh, and they could move you.

So whenever someone scoffed and said, “You read comic books?” I would hand them something by Gaiman. And to be fair, I still do.

The Books of Magic are Gaiman’s take on the magical side of the DC universe And there is plenty to tell about that. But that is for next week.

That brings us to… 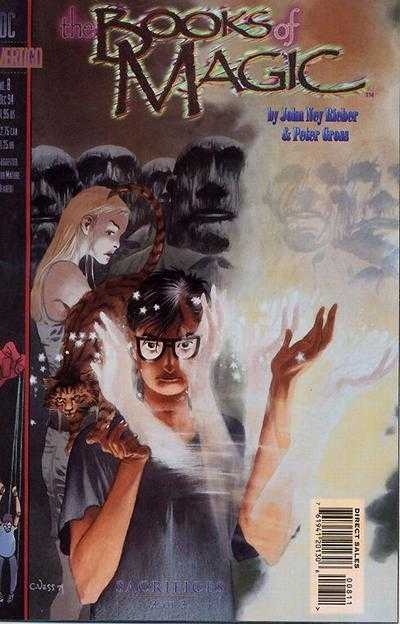 Previously on the LLL: We talked about Faeries, now we talk about magic in general.

This is much more “comic booky” then we’ve seen so far. It still has a Vertigo feel but it has much more in common from the main super hero line than the collage/watercolor art we’ve seen from Vertigo thus far. A young boy with dark hair and glasses named Harry Pott…wait sorry, Timothy Hunter makes magical gestures while a scowling blonde looks sideways at him and a tiger-striped cat crawls on his shoulder.

A line of Easter Island style statues stand ominously behind.

We open with Timothy Hunter as an adult doing terrible things to his younger self’s guardian Martyn. Timothy seems to be under the control (or at least influence) of Barbatos, a daemon. Barbatos is overly flattering but very insincere.

Next we find he young Timothy writing in his diary being very much a confused teen. He goes downstairs to talk to Martyn but is stopped by a golem who holds him by one arm in the air. Tim is able, through fear and confusion, to change the golem’s face from brooding and scary to a smiley face and gives him a new name, Happy. This makes the golem answer to only Tim. Happy puts him down.

Leah, a servant of Martyn, witnesses the whole thing and tells Timothy that what he did was impossible. Timothy comments that he was glad he didn’t know that.

Leah and Timothy soon find that Martyn has been killed quite brutally. and decide to leave together. Before they do Leah asks timothy to take a box of her with him. He does. Leah then burns the house down but Timothy asks if the golem is flammable. Leah tells him the golem is not and Timothy is relieved.

The two drive to see Timothy’s dad, not his real father but the man who raised him, who is injured and in a coma. Along the way Leah explains that she is not just a servant and really a succubus. And that timothy is her new master.

She explains that in the box is a drugged cat and if Timothy sacrifices that cat in a ritual and performs a spell he can save his dad. Tempted, Timothy refuses saying that he the cat is unaware of his situation and an unwilling participant. He lets the cat go free.

Leah then tell him that she must obey every command of his and do he commands So Timothy then commands her to go have a good life and never take commands from anyone, especially him. She leaves smiling.

Timothy wonders aloud if she will be alright when the cat he released comes back and he picks it up and carries it away.

in the future (2012) we find an adult timothy disheveled in an alley living in a cardboard box. Barbatos is whispering flattery and telling him how great and wonderful he is. Barbatos seems pleased with the situation.

Oh this is going to be fun. I had forgotten just how much I enjoyed this series. Reading it now, 20 years later, the comparisons to Harry Potter are unavoidable. That being said I will avoid it for the moment but it will have to be addressed at some point. Other comparisons to Buffy, and Angel and Supernatural come to mind as well but again it is still too early to properly talk about it.

No, this issue – while admittedly jumping in mid-story – is still pretty great on its own without talking about other franchises. And you can see where others would be influenced by it. The naive child with an ability powerful but unknown alone in a world far beyond his imaginings wanting only guidance and companionship (like a teenage Slayer or a abused boy living under the stairs). And at the same time we see an adult version of the child seemingly lost, now with guidance but dubious one. Is this the future inevitable or a corruption of what might be? Great storytelling and influential in many, many ways.

Overall though I liked the character building of Timothy. He still doesn’t know himself or his power but his awkwardness is charming. i like that he seemingly makes the “right” choices or at least the ones that feel right to him. You know the golem will be important, and the girl will play a role, and the cat of course, but we are not hit over the head with these things. They seem to just happen and we are allowed to just let them unfold.

Yes, this is going to be fun.

Next time on an all new episode of Long Lost Longbox: Books of Magic #9, Stay strapped in because we’ll be covering Books of Magic for a long, long time. This is a good thing.