Vacation is a fantasy that is hard to leave behind. For a week, two if you’re lucky, you get to play the part of a rich man, to be a pampered celebrity. Albeit a B-list celebrity, or more than likely just a C or D lister, but still pampered. It is a life of unreality that brings with it an illusion of Other Life. In Other Life there is no work, you eat out every night, there is always something new to do and there is always someone there to ask if they can make you happier and someone else makes the bed and leaves a little chocolate on the pillow. Other Life is a beautiful illusion and one that will not be broken till the credit card statement arrives, but that’s not for at least another month. Till then we walk in magic.

To add to the normal levels of unreality my daughter and I just spent a week at Disney World. There are few things on this Earth that are more unreal than a Disney theme park. It is a systematic, regulated program of calculated happiness specifically designed to place you firmly in a bubble of a specific kind of unreality. A Pixie Dust Reality.

For the most part Pixie Dust Reality works flawlessly. The vast majority of visitors are transported to a world where everything is clean, everyone is pleasant, the world is filled with diversity where everyone respects each other’s cultures and ideas. This illusion of reality will cost you three to four times as much as actual reality and the cultures and ideas will not include anything that might be considered…let’s say difficult. But that is part of the fantasy. It is a storybook world with happy endings. The Pixie Dust Reality bubble is strong and addicting.

It is not however impenetrable. Two common ailments can afflict the park goer.

The first is Pixie Dust Toxicity (PDT). PDT affects people by overwhelming them with high levels of unreality so that they cannot tolerate anyone or anything that may remotely burst the bubble. It manifests itself in fits of maniacal attempts to make everyone happy – happy being defined as euphoria – and bursts of tears and heavy sobbing when this inevitably does not happen. PDT typically affects women but a large number of men come down with it as well.

The second is Pixie Dust Resistance (PDR). This happens when one has a natural immunity to joy or is consciously attempting to resist it. The effects of PDR rage from general grumpiness to outright hostility. It manifests itself in speech through gritted teeth and screaming phrases like, “Do you know how much I paid for this?” and, “I’ll give you something to cry about you spoiled brat!” PDR affects both sexes equity but has a tendency to afflict those who naturally exhibit tendencies of being an asshole.

Both of these ailments can afflict children simultaneously on a minute by minute basis. However in children they can easily be cured by simply administering a hug and a soft-serve ice cream cone.

For my part I will admit to being afflicted by low levels of both of these ailments but have never truly exhibited full blown symptoms. No, for the most part I simply inhale the pixie dust in deep breaths and gulps of air. I let the bubble engulf me. A dose of unreality can be good for you from time to time. 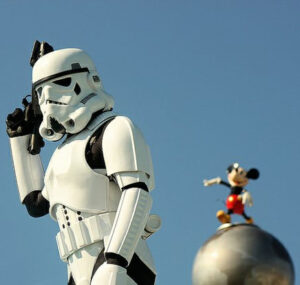 Now there is a bit of an anti-corporate streak that runs through me. The idea of a large, monolithic entity controlling everything tends to make me bristle. And Disney is a massive corporate entity that has in the last few years purchased several companies and franchises that make up roughly 80% of my childhood. It could be quite easy for me to rant and rail against the conglomeration of entertainment into a synergistic mass of mediocrity and commercialization.

Or I could, you know, shake hands with a Stormtrooper.

To be honest I find it really hard to be an idealistic windbag when I get to meet Captain America and have my picture taken with Winne the Pooh.

So I embrace the bubble and spend my days surrounded by pixie dust and fantasy. I eat fried foods served on sticks and drink fruity rum drinks with tiny umbrellas in them. I sit by pools in the humid air surrounded by the smell of chlorine and sun tan lotion; all the while safe in the illusion that there are no worries and the fantasy that this will never end. But alas the fantasy must end. The Other Life inevitably must become Real Life and unreality become reality once more.

So we pack our bags with dirty clothes and board the plane to take us away. We say goodbye to vacation, to the Other Life, to the Pixie Dust Reality in favor of just plain old reality; the everyday routine.

But strangely that is when the best part of vacation happens. When in the quiet moments just before we land my daughter turns to me and says, “That was fun, I’m very happy. I love you.”

Who needs illusion when you have a reality like that.